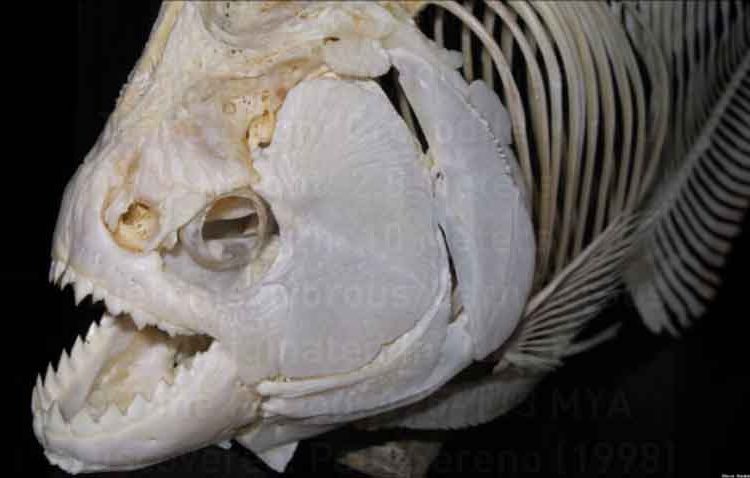 Despite their shy and timid nature, much more so than is thought, one should feel lucky that the Megapiranha is no longer with us. Little is known about it, but what exactly do we know?

In short, the Megapiranha, currently extinct, was a prehistoric fish thought to be around during the Miocene era. It is a relatively new genus of Piranha named by Alberto Luis Cione after a 2007 study. It lived 8 to 10 million years ago in Argentina. It is thought to have been around 3 feet long and weighed around 10 kilograms.

How Big Was a Megapiranha?

The study of the fossil of a Piranha found in the 1900s, indicated that the fossilized upper jaw bone belonged to a large fish. By comparing the jaw structure of the extinct family with the current Piranha species then the fish could have been a meter or 3 feet.

The current Piranha fish weigh about 3 kilograms, while the extinct Megapiranha could have weighed more than 10 kilograms, given their length and size of the jaw. It is however assumed that the fish would have been proportional to the current species of Piranha, thus removing the possibility that the fish was small with a larger mouth.

The Megapiranha fish could therefore have been four times larger than the current Piranha species.

That is quite some fish.

The modern Piranha has six teeth while the Megapiranha had seven teeth on the upper jaw. Scientists believe that the seventh tooth could have been lost through evolution, or two of the teeth could have fused into one.

The Megapiranha is believed to be the bridge between the current Piranha and their closely related cousin fish, the pacu. The pacu have two rows of teeth on their jaw that are used for crushing nuts. The Piranha, on the other hand, have one row of sharp chisel-shaped teeth used to tear flesh.

The Megapiranha contained a set of zigzag teeth that indicated that the two rows of teeth in pacu could have fused at this stage of evolution to form the single row, just like that of the modern Piranha.

The diet of the Megapiranha is unknown, but the study of the jaw indicates that the fish could have been a carnivore that used its big sharp teeth, arranged in a zig-zag manner to crush through the bones and the flesh of its prey. It is not certain if the fish lived in shoals like the current Red-Bellied Piranha fish. 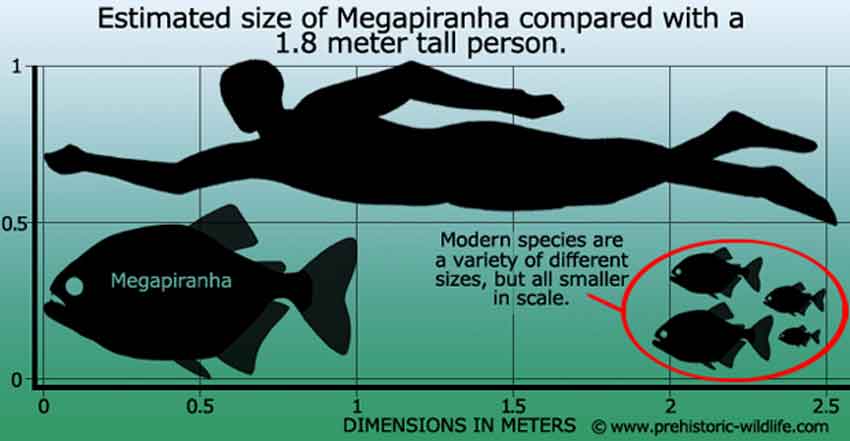 How Was it Found?

The remains of the Megapiranha’s fossilized jaw were discovered in the 1900s on the riverside of the north-eastern Argentina. It stayed unstudied till 1980 when scientists developed an interest in the jaw, which was stored in the drawers of one of the Argentinian museums.

The species was named in 2009 as being the extinct Megapiranha that existed millions of years ago. The fish could have gone extinct due to shrinking availability of prey to sustain there numbers, due to the rise of the Andes Mountains that separated the Amazon and the Parana basin.

Explorers found the fossil in the Amazon basin when they were interested in the remote wilderness of the jungle. The fossil was kept in a museum with little interest as explorers and scientists could not figure out which animal the bone belonged to.

Hollywood B-movies bad name the Megapiranha and depict a genetically modified Piranha that wreak havoc on humans. A movie was associated with the prehistoric Megapiranha.

To know the real biting power of the Megapiranha, scientists have studied the black Piranha, which is the largest existing member of the Piranha species. The modern Piranha has a single row of triangular blade-like teeth that are arranged on a very muscular jaw. 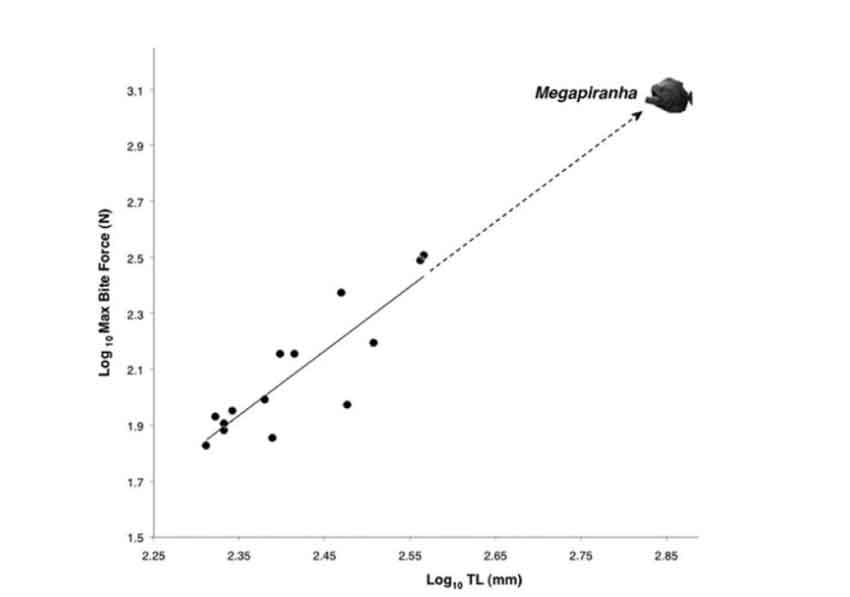 The black Piranha, in particular, can exert a biting force which is three times its size, estimated to be about 320 Newtons (72 pounds). The bite is the strongest ever recorded for any kind of fish making it the ‘biting champion’ in the fish world.

The biting force when compared to other predators, such as the alligators, the force exerted compared to the size of the body, the black Piranha beats them all.

The study of the fossil from the Megapiranha jaw indicates that the fish might have been bigger given the size of the jaw. The extinct member of the Piranha family could have had a force estimated to be 1,240 to 4,749 Newtons (279 to 1,068 pounds).

The force would have been as strong as that of the great white shark which is known to eat large animals, like the seals, although it only weighs about 10 kilograms. With such a strong bite the Megapiranha would crush hard food such as the shells of crustaceans, turtles and slice into soft flesh effortlessly. 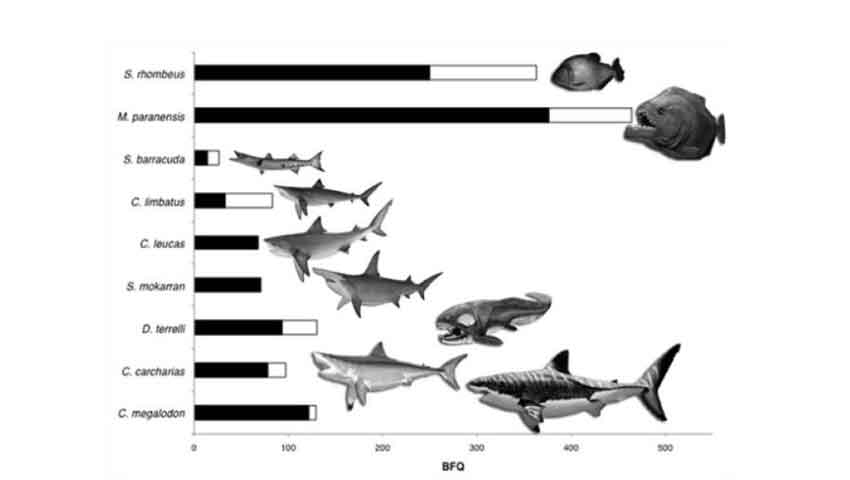 Where Did the Megapiranha Live?

Research indicates that the Megapiranha lived during the Miocene era when almost all animal species were large. During that time the Amazon and the Parana basin was still one continuous wetland.

During the rise of the Andes Mountains, the basins were separated into two distinct entities. The Megapiranha was found on both basins and within the river systems in both basins, which include the Amazon River and the Parana River.

The Megapiranha was mostly found in the rivers of the Amazon basin, particularly the San Francisco river, the Amazon river, Paraguay and the Orinoco rivers.

They thrived in the conducive Amazonian climate that had warm water, and plenty of food. They may have gone extinct as a result of the two basins being separated.

When Did It Exist?

The Megapiranha is currently extinct, but is thought to have lived about 8 million years ago. A clear carbon dating of the fossilized bone indicated that the fish could have lived in the Miocene period before the rise of the Andes Mountains.

The Amazon and the Parana wetlands were still connected. The Megapiranha could have gone extinct when the two basins separated, resulting in food scarcity.

What Did the Megapiranha Eat?

The fossilized jaw reveals that the Megapiranha fish was the connection between the current Piranha and its distant relative, the pacu. The current Piranha has one row of chisel-like teeth on their jaws that are used to tear flesh.

The pacu, on the other hand, has two rows of teeth that are used for crushing nuts and seeds. The Megapiranha had teeth that were arranged in a zigzag manner on the jaw, indicating the disappearance of the second row of teeth.

The Megapiranha’s teeth were large and sharp, indicating that they were used for crushing the bones of their prey, and for cutting through nuts. The diet of the Megapiranha was established after scientists studied the structure of their jaw.

In all probability, it had a diet very similar to the current Piranha.

Do We Still Have Remains?

Megapiranha’s only known remains now is a fossilized jaw that was found in the 1900s during exploration missions in the Amazon wilderness.

The fossil was not studied till the 1980’s when it caught the attention of scientists and was named the mega piranha in 2009 after it was concluded that the strange jaw could have been the bridge between the current Piranha and their distant relatives the pacu based on the structure of the teeth and the bones.

No mega piranha still exists right now, but the current Piranha is the only known relative that still exist at the moment.

When Did it Die Out?

The Megapiranha died out around 8 to 10 million years ago; a scientist established this after a carbon dating of the fossilized jaw. It is hard to give an exact date when the species died out, but the carbon dating indicates a rough estimate of the time the species went extinct.

No one is entirely sure though, and there could have been other reasons.

This ferocious predator could have died out due to other natural calamities that might have fallen in the Amazon region during that period, leading to their extinction during the Miocene period.

The Megapiranha according to fish experts is the bridge between the current Piranha and their distant relative the pacu. The pacu has two rows of teeth on the jaw while the Piranha has a single row of teeth on theirs.

The Megapiranha according to the 2007 study of the jaw fossil indicates that it had a zigzagged row of teeth indicating the disappearance of the two rows that is typical to the pacu and the evolution of the single rows that is seen in the Piranha.

The large sized jaw indicates that the Megapiranha would have been four times larger than the modern-day Piranha. It is estimated to be three feet and weigh almost 10 kilograms. The Megapiranha had such a powerful bite comparatively, to almost anything seen on earth.

The black Piranha evolved with powerful muscles just like its Megapiranha relative. The diet of the Megapiranha according to the fossil, indicates that the large teeth could crush into the bones of its prey and tear soft flesh effortlessly.

The study on the Megapiranha, conducted by Alberto Luis Cione, can be found here.