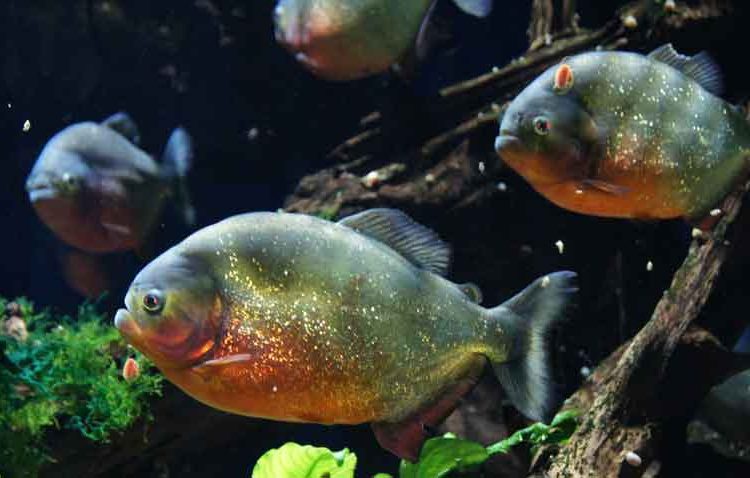 With endless legends about the Piranha, it has grown to have a fearsome reputation. How much of it warranted and how much is scaremongering is open to debate, but if hungry, and in large enough numbers it can be a terrifying proposition. But are the myths and legends true?

In short, both yes and no. They can, but they don’t for various reasons. Firstly, they move away from large living creatures in the water, but theoretically it’s estimated that a human could be reduced to a skeleton within 5 minutes by 300 to 500 Piranha fish. A cow, being a larger animal would take around 3500 Piranha the same amount of time to take the flesh off the animal. In reality, this amount of Piranha don’t school together.

How Piranha Eat – Why They Can Strip Animals

Piranha seem to be built for scavenging. They have razor sharp teeth and patrol in schools.

Those teeth are triangular and interlocking, and coupled with the powerful biting force from those jaw muscles, it’s no wonder that people loose bits of their fingers or toes in Piranha attacks.

As odd as it may seem, but Piranha don’t chew their food. They bite down, sear off flesh and swallow. The flesh from the victim goes straight towards the stomach. It’s just a matter of keeping the use of those jaws around the victim repetitively.

Also, even though Red-Bellied Piranha school in numbers of around 20 and upwards, if a large carcass is available several schools can descend at the same time. Hundreds of Piranha can attack a single victim.

They are particularly efficient eaters as well, if not a little messy. In there fabled frenzy, they bite and then rotate away allowing another Piranha to take a bite. They are exceeding proficient at queuing for their meal. The speed is incredible, and often this is where the effect of boiling water comes from.

The effect can be further amplified if the Piranha are starving. Starving Piranha attack with more vigour and the attack is more sustained. This is what is said to have happened when Teddy Roosevelt witnessed the incident with the cow.

Can They Strip a Human to the Bone Within Minutes

The rumor is said to have started with Teddy Roosevelt. What he witnessed was said to be a cow, attacked ferociously and devoured in minutes by a pack of ravenous Piranha.

Nevertheless, Ray surmises that it would take 300 to 500 Piranhas to take the flesh of a 180 pound human being in five minutes.

Attacks like this aren’t reported to have happened, but it is an interesting point of view reflecting the speed at which Piranha can attack and strip another animal. 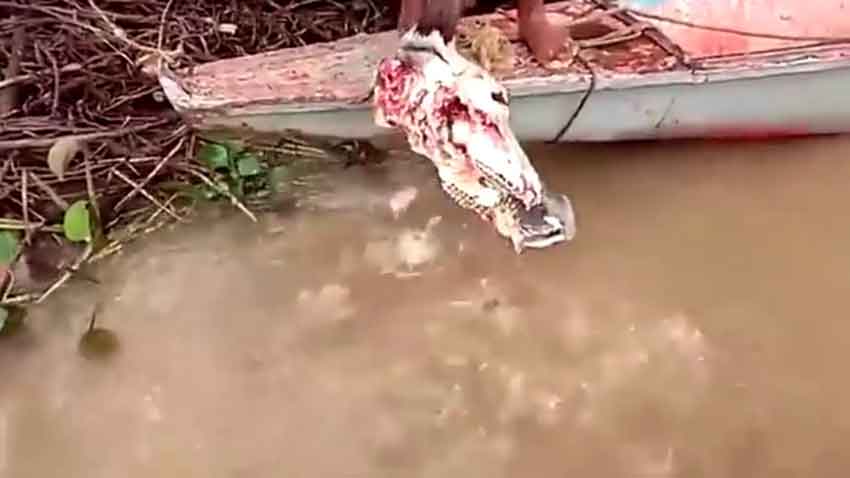 Can They Strip a Cow to the Bone Within Minutes

If Teddy Roosevelt is to be believed, then the cow took a few minutes to be taken to the bone by the Piranha.

The question is, that has to be a lot hungry Piranha, which is consistent with the faked incident reports.

But if it takes, let’s say 400 Piranha to demolish a 180 pound human in five minutes, how many Piranha are needed to strip a cow in a few minutes.

Well, the average weight of female cattle is 1600 pounds.

Scaling up, it would take 3500 Piranha to strip a female cow to the bone in 5 minutes.

Or 8750 (yes, nearly 9 thousand) Piranha two minutes to take a female cow to its skeleton.

That seems rather a lot of Piranha.

So it’s unlikely that Piranha can strip a cow to the bone within minutes because of the sheer numbers involved would be huge.

If the natives were putting on a show for Teddy Roosevelt, and had been catching Piranha for the previous weeks, if they’d caught 2000 Piranha fish that ‘few minutes’ is probably nearer 10 minutes.

Or it was a much smaller than average cow.

While it is an interesting question for people interested in Piranha and their eating speed, the reality is that either forced or unrealistic conditions have to be met to conclude that either a human or a cow can be stripped to the skeleton within minutes.

Theoretically a drowned human could be taken down to the bones, but you would need around 300 to 500 Piranha to do it.

A cow being a much larger animals makes a mockery of the idea that a cow can be eaten to the bone within minutes. As Teddy Roosevelt and a bit of maths has proved, it would take around 2000 starved Piranha around 10 minutes to devour an average cow.