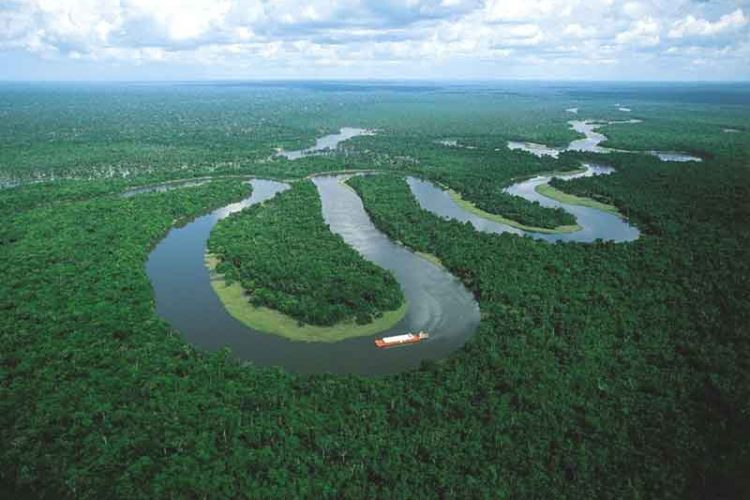 Whenever you investigate the Piranha, a natural question is whereabouts would you find these fish. They are world renowned as a predator fish, but where are they naturally found?

In short, they are not found equally distributed around the world. Unless in tank aquariums or zoos, they are exclusively indigenous to the Northern part of South America along the Amazon river and the Amazon Basin. They live in both the flowing river and the freshwater lakes of the subtropical rainforest. Piranha are a non migratory species and exist in the same parts of the river their whole lives.

Its distinct source of water includes the Nevado Mismi and Apurimac mountains. The Cordillera Rumi mountain is another notable water source at the headwaters of Mantaro in Peru. These tributaries join to form the Ucayali river that meets with the Maranon river which is considered the main source of the Amazon River. 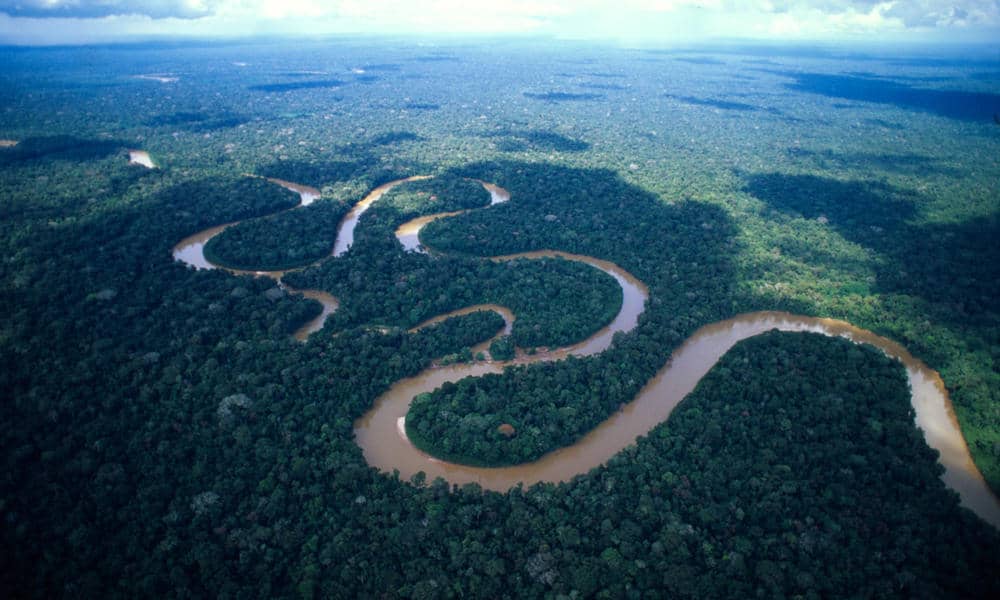 The river flows through Manaus on to the largest cities in the region.

The river has the largest discharge at an average of 209,000 cubic meters per second which is greater than the next seven rivers combined. The Amazon river occupies about 7050,000 square kilometers. This area represents about 40% of the total area in North America and is responsible for almost 20% of the earth’s fresh water.

The fresh water from the Amazon river flows into the ocean over the salty water, leading to an altering of the top color of the ocean for over 2,500,000 square kilometers. It is a large and powerful river.

The tides in the Atlantic carry the sediments into the oceans, thus the river fails to form a typical delta. The depth of the water is about 26 meters, but during the rainy season, it raises by 9 meters which floods the surrounding forests creating ‘flooded forests’ making the floodplains the most exclusive habitat in the world.

All the rivers around the Amazon do not flood at the same time. Some begin to flood in November and might continue to flood till June. The Rio Negro starts flooding around March when it starts to rain. The Madeira on the other hand, rises and falls two months earlier than the Rio Negro.

The Amazon river is largely navigable on small vessels and you will find small fishing boats are typical on this river. The river goes through many subtropical South American countries which include Brazil, Peru, Bolivia, Colombia, Venezuela, and Ecuador.

The river has a diversity of fauna which includes neotropical fishes with new fish species being discovered each year. The river contains typical freshwater fish. The occurrence of fish species varies depending on the depth of the river, availability of food and other factors that favor the growth of the species.

Among the over 100 fish species in the Amazon is the Piranha fish that live in this tropical region.

The Amazon basin is the part of South America that is characterized by the drainage of the Amazon River and the tributaries. This basin is estimated to be sited on an area of about 7,500,000 square kilometers.

The basin constitutes about 40% of the total area of North America, and it is located in Brazil, Bolivia, Ecuador, Colombia, Peru, Guyana, Venezuela, and Suriname. The Amazon rainforest mostly covers the basin with approximately 5,500,000 thick rainforest which makes the largest the rainforest in the world.

The Andes mountains is the source of the Amazon River with the main tributary, the Maranon river in Peru. The river is about 6,400 km.

The Amazon basin is characterized by thick plant growth with varieties of plants that make up about 50 % of tree species in the world. The trees are extensive, evergreen and coniferous. The canopies prevent the sun rays from reaching the floor due to the dense roof canopy.

The ground of the basin is dark and damp with plants that grow in the shade flourishing. Bromeliads and Orchids exploit other plants in search for the sunlight. The trees that are native to the Amazon basin include rubber tree, Assai palm, and the Brazilian nut tree.

The majority of the animals that inhabit the Amazon Basin are the rodents, bats, and birds. Larger animals include the ocelot, capybara, jaguar and the South American tapir. Many reptiles, as well as the amphibian species, can also be found in the Amazon region.

About 2,500 fish species are found in the Amazon basin, with about 1,000 species which have not been identified making the fish population in the basin greater than any part of the world.

The richness of the fish species in the basin is attributed to the large difference in the characteristics of the water in the basin. The fish vary in form and size, with the largest being the arapaima and the smallest Paraiba. The Piranha fish is found in the Amazon basin, and they are native to this region.

The Amazon basin is categorized by low-water season and the wet rainy season characterized by flooding. The climate of the basin, however, is hot and humid. Some regions, however, experience cold winters. The average temperatures in the basin are about 25 to 30 degree Celsius.

There is no distinct difference between the winter and the summers in this part of North America which make the area ideal for Piranha to inhabit. 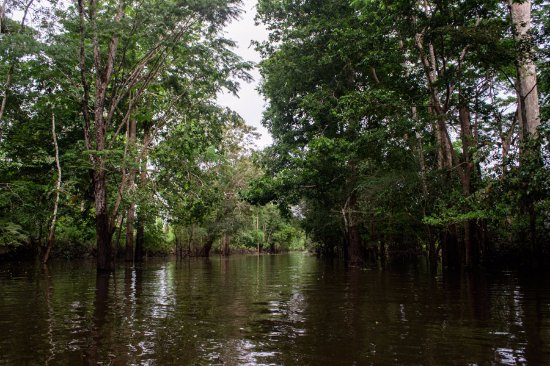 The Amazon region has very few lakes. Most of them are formed as a result of slow-moving waters that are considered to be lakes. The Andes lakes are found at about 3,500m elevation other lakes are found at the lower part of the Amazon.

Lake Valencia, for instance, is found in the Amazon basin. It is drained into the tributary of the Orinoco river which flows into the Amazon river. Lake Valencia is a freshwater lake and is located in the north-central region of Venezuela. The Orinoco river is famous for the lobe toothed Piranha which is said to amongst one of the most aggressive Piranha fish species.

The São Francisco River systems run entirely through the territory of Brazil making it the longest river system in the country. The river originates from the Canastra mountain ranges and is about 2,914 in length.

The river has more than 200 known fish species including the pygocentrus piraya one of the largest species of Piranha.

The sources of these rivers are known to be the Andes hills which do not contain salt soils. The region is hot and humid, and it rains almost throughout the year which adds to the freshwater in the area.

When the fresh water from the Amazon basin is emptied into the Atlantic Ocean, it forms a top layer of fresh water with a different color than the underlying salty water in the Ocean.

Most fish in these regions only survive in freshwater, although the temperatures and color of the water differ from one part of the basin to another. Geologists believe that the whole 6400 kilometers of the river contain fresh water. 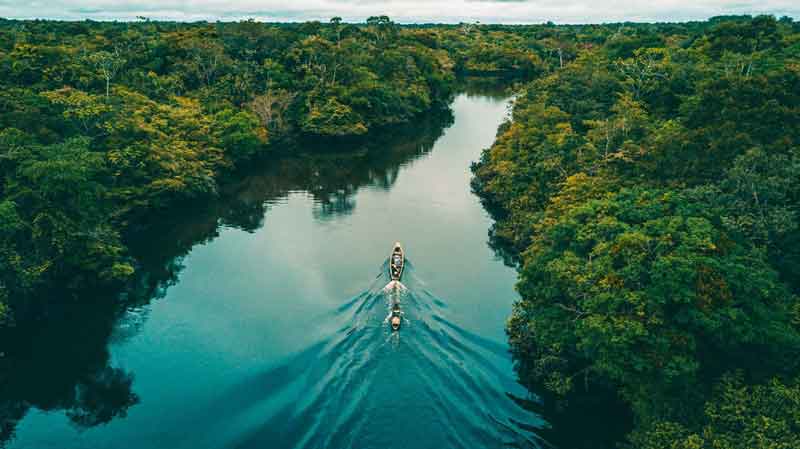 Are Piranha Found Anywhere Else?

One person in China reported that they had been bitten by a fish, which authorities believe was a  Piranha fish. The government then imposed strict measures on the importation of non-native fish, which could disrupt the ecosystem.

Most of the Piranhas found in different parts of the world have been introduced to public aquariums or home ponds. Some people love to keep the fish as a pet as they are unique and beautiful.

However, when you want to keep these fish species in an aquarium, you need to contact the authorities to ensure that your State allows pet Piranhas.

The Amazon basin is one of the most unique habitats and ecosystems in the world. The Amazon river that feeds the basin contains more than 3000 fish species that are unique to the area, mainly due to the differences in water characteristics within different geographical locations throughout its length.

Among the fish species in the Amazon is the Piranha fish, which has caught the attention of Hollywood in recent years as they are depicted as being a fierce predator. The Piranha is native to these parts of the world, but has been adopted in various aquariums and ponds throughout the globe.