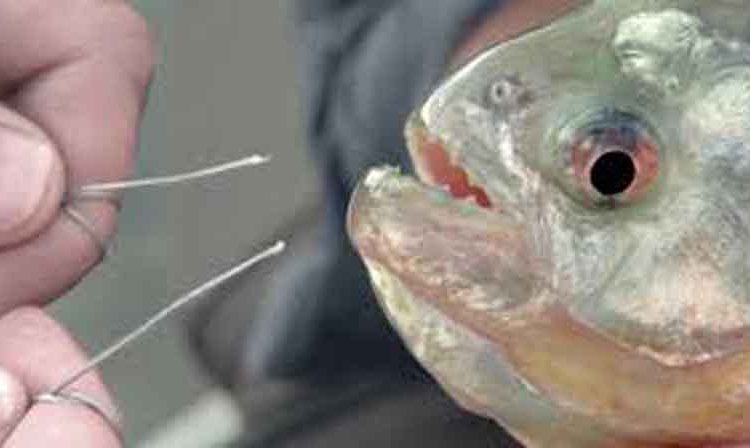 Given its reputation and rows of razor sharp teeth to be used in attacking prey it’s natural to wonder about the bite of a Piranha. How worried should you be dipping a finger into the water?

In short, as a scavenger and omnivore, the Piranha is equipped with a row of finely serrated razor sharp teeth and one of the most powerful bites in the natural world. Most bites on humans are warnings, not an outright attack, and many people report not having felt the Piranha bite, the razor sharp teeth acting like scalpels with the power of the Piranha jaw muscles. The Black Piranha delivers a bite 30 times more powerful than its own bodyweight and can cut through steel line.

How Big Is a Piranhas Mouth?

Piranha have a mouth which is relatively small for its body. The size of the mouth varies depending on the species, and the age. Typical adult Piranha are about 12 to 30 cm in length, and the width of their mouths is roughly 3cm.

Although they are known to be ferocious carnivores (mostly they are omnivores), their body size and small size defy this myth. Their mouths have muscular jaws with sharp teeth which tear through flesh.

The size of the muscles in their jaws make-up about two percent of the total body muscles accounting for such a strong bite. 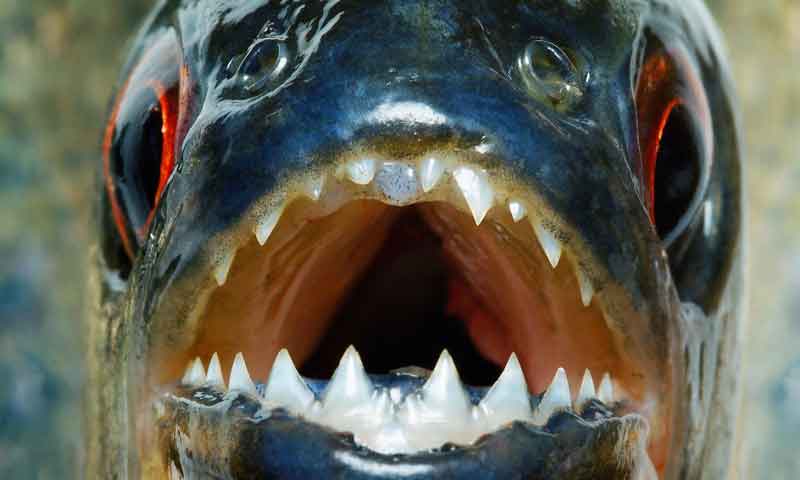 How Powerful is the Bite?

Piranhas have powerful jaws with razor-sharp teeth. The Piranha is sometimes referred to as the ‘biting champion’ of the fish world. By comparative size, the bite power of a shark is only one fourth as powerful as that of a Piranha fish.

This allows the Black Piranha to exert a biting force of 30 times its own bodyweight, and this said to be a feat not matched by any known living creature. Quite an accolade.

The muscles in the jaws that are used for biting can be estimated to be around two percent of the weight of the fish. A Tyrannosaurus Rex bite is estimated to have been around 3000 lbs of force but this is still nowhere near 30 times its own bodyweight.

The jaw muscles are relatively near the tip of the mouth and the teeth which gives great leverage on the bite. Coupled with razor fine serrated teeth it is no surprise that many people only report being bitten when they see blood, not having felt the bite.

Black Piranha can bite through steel rods and can cause damage to fisherman’s net if they are caught in them.

Ancient Piranha was said to have possessed two rows of teeth. It is not clear what these ancient fish ate, but it must have required tearing of flesh. Piranhas possess tricuspid interlocking teeth arranged in a single row lining a jaw.

The teeth are very sharp with the enamel that can be compared to that of a shark. Most Piranha will have around 20 teeth.

Piranhas tend to lose teeth throughout their lives, and they replace these teeth in quarters, unlike the sharks that replace the teeth individually. The four sets of teeth are replaced in about 100 days when they fall off.

How Does a Piranha Take a Bite?

Piranha immobilize their prey, especially other fish, by attacking their eyes, fins or tails. They can easily attack and overpower the prey when they are immobile. With larger animals, the fish will clamp down and then wiggle its body when it bites with its sharp teeth, and move away swiftly.

A study concluded that around 90% of the time the tail is attacked first.

When scavenging a dead mammal in the river, one of the fish will bite the animal to see if it will respond. If it doesn’t the shoal will assume that the large animal is either dead or weak; therefore they attack it.

They are also streamlined for fast movement in the water making it attack a large animal very fast and get away swiftly. They have a top speed of around 15 to 25 mph in short bursts. 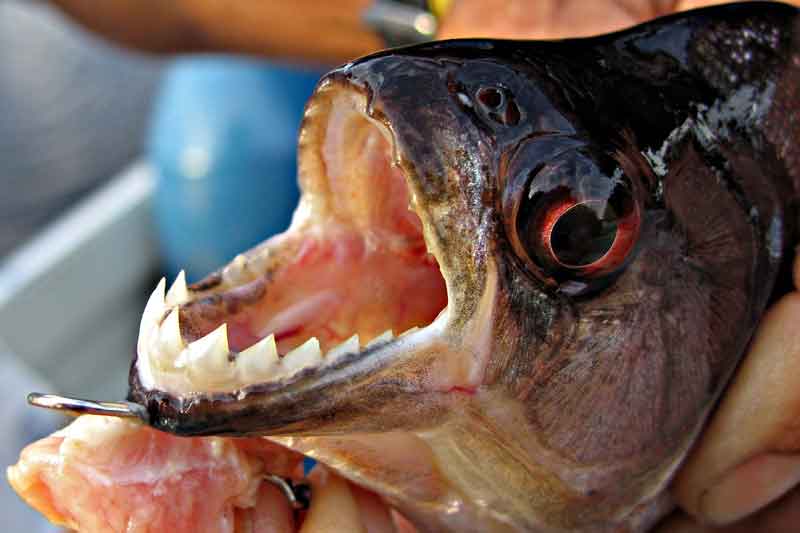 What Happens When a Piranha Bites You?

Piranhas do not feed on humans unless they they are unconscious or incapacitated in the water. Or if you are threatening a nest.

If you are swimming in water infested by Piranha fish they are just as likely to move away from you as you will be assumed to be a predator.

Most people bitten by Piranha are threatening their eggs.

Piranhas will bite the feet and the toes and swim away very fast. The attack on humans in Suriname, on a river where about 70 people were attacked was linked to the ability of the Piranhas to react to noise, splashing, and spilling of food.

Nearly all bites were ‘warning bites’ and everybody came out of the water safely.

It is also found that during the low season when there is a scarcity of food the Piranhas will bite humans when they are prone to hunger. 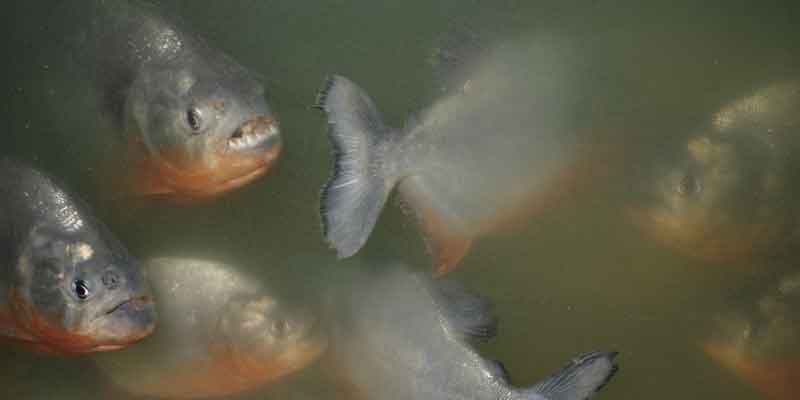 Piranhas are known to be merciless eaters who will chomp away at anything that comes their way, they therefore loose teeth occasionally. Luckily just like the whales, Piranhas replace their teeth, but they replace their teeth in four sets.

The process of teeth replacement takes about 100 days before new teeth become mature.

A Study on the Piranha Bite

In 2012, a study was done to test the bite force of known animals living in the world today. The study was interested in how powerful a bite was delivered by Piranha compared to other predatory animals.

They collected around 15 Black Piranha ranging in size from 20 –36 cm and using a portable force gauge measured the biting pressure from these fish.

Concluding that the impressive jaw muscles were responsible for a bite force 30 times its own weight and the most powerful of any predator gave the Black piranha new status in the scientific community. 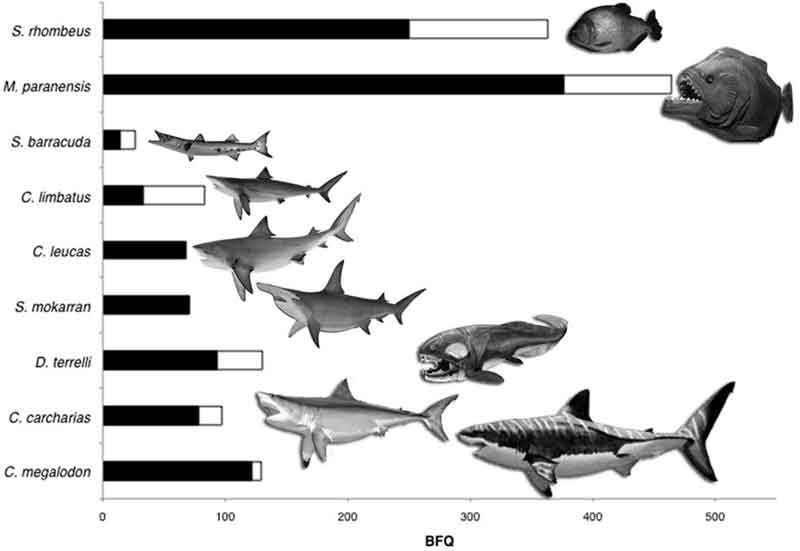 Piranha have one of the strongest bites in the fish kingdom. Their bite is almost three times of their body size. The muscles on their jaws are estimated to be two percent of the total muscles in the body giving them such a strong biting force.

Although they have such strong bite Piranhas rarely attack humans. They seem only bite during the dry season when they are prone to hunger.

Although they lose their teeth at some point, they replace them quarterly in about 100 days.

From a human perspective you are most likely only to receive a ‘nipping bite’ when you are threatening a nest, as this seems to be when most people receive bites from a Piranha.

So while Hollywood exaggerates the feeding frenzy and over aggressiveness of the Piranha, the power in the bite is not exaggerated. It really is a powerful bite.