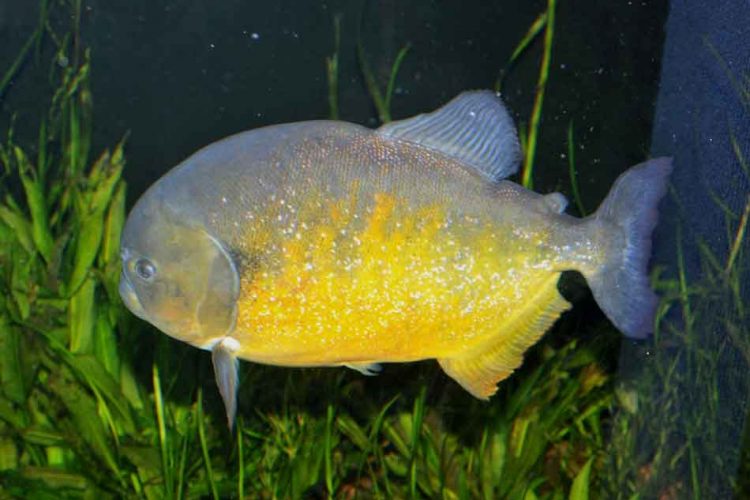 With around 30 to 60 species of Piranha, depending upon how you define them, there is indisputably a more carnivorous genus, the pygocentrus. The Sam Fransicso Piranha (Pygocentrus Piraya, Piraya Piranha) is from that genus.

So what is the Pygocentrus Piraya like as an overview? In short, the San Francisco Piranha is a large Piranha restricted to the waterways of north east Brazil. It’s recognizable for its large silver eyes, tufted adipose fin and a body coloration of pale yellow and crimson that gives it a flame look. They require clean water, has the typical omnivorous diet of any Piranha. While shy and retiring they are very aggressive when their space is confined, very large aquariums are recommended for home use. They are not bred in captivity and the fish normally has to be imported, making them more expensive than the more common varieties to acquire. 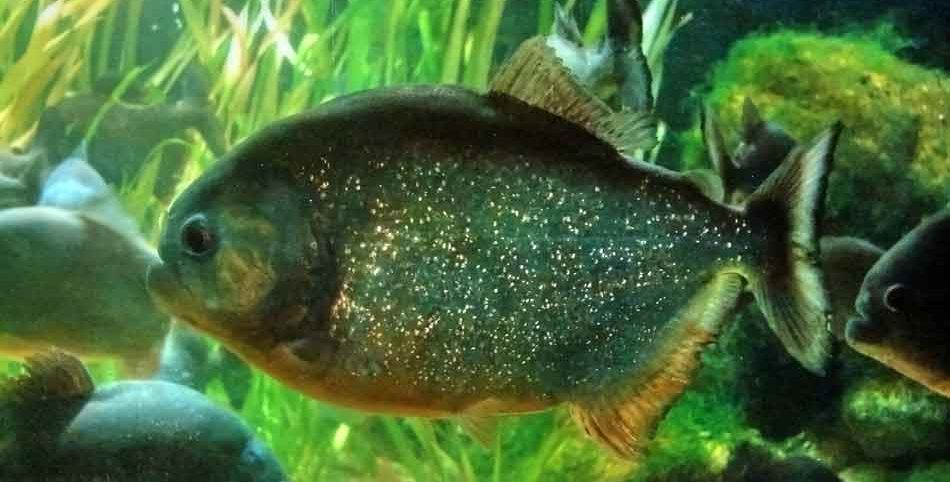 Known colloquially as the San Francisco Piranha, but also as the Piraya Piranha, the scientific name for the species is Pygocentrus Piraya.

Thought to be an aggressive fish, especially coming from the pygocentrus genus, it as one of the largest Piranhas and comes from the San Francisco river basin in north east Brazil. Naturally in the wild, in its native habitat it is thought to be able to reach around 20 inches in length and weigh around 9 to 10 lbs.

Unusually for most Piranha it has quite a few names that it is known by, unlike the Red-Bellied and along with being known as the San Francisco Piranha, named after the river within which it found, more locally it can be termed ‘the black tailed Piranha’ or ‘the king emperor Piranha’ but the common local name is Piraya Piranha.

Like most Piranha thought to be a carnivore it is actually classed as an omnivore, feeding on insects, worms, fish, fruits and plant matter. Again, like the Red-Bellied from the same genus, it is most aggressive when it is threatened, when breeding or under extreme hunger. This is when it is a danger to humans, otherwise it will naturally shy away large animals in the water.

It is not a common aquarium fish and sometimes locating one is tricky, especially compared with the ease of obtaining Red-Bellied Piranha. It is not considered a common Piranha to breed, so for aquarium desires it may need to be imported. Thus, compared to other Piranha it can be quite expensive.

Like most of the pygocentrus genus, although it may form schools, other fish species in the aquarium are not wise. If you want a number of fish in the aquarium it’s sensible to make sure they are from the same species.

Although there is never a clear cut answer sometimes, with mature San Francisco Piranha, you are advised to keep them as a solitary fish, despite being from a schooling genus. If stressed they can become cannibalistic, although juveniles are said to be able to be kept together, as they are with most Piranha.

Very large aquariums are said to be needed to keep this species healthy and stress free. They can produce a lot of waste and therefore the tank will need regular and thorough water changes. Like most Piranhas they will seem very shy and timid, but can produce a very serious bite, if not given the respect they deserve.

With the pygocentrus Piranha, which incidentally comes from the greek meaning ‘back or rump’ and ‘spine’, perhaps pointing to their abdomen shape, the common name of Piraya comes from a local naming of the fish.

In the wild clear water of the San Francisco river, pygocentrus Piraya can live to around 20 years, but as an aquarium fish you should expect half of that, say 10 to 12 years. 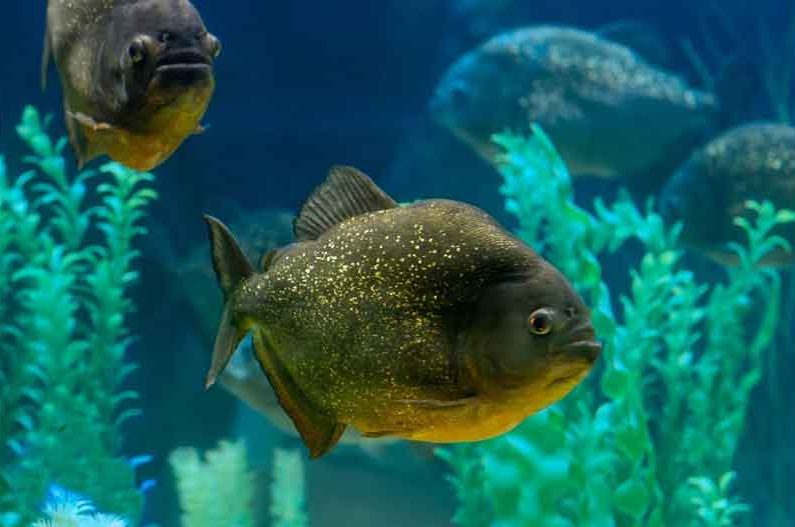 In extreme cases the pygocentrus Piraya can grow to 24 inches in length, approximately the same size as the black Piranha. However, a big fish would be considered to be around the 12 to 14 inches mark. This would be around 8lbs as a weight,

In an aquarium environment, fish between 10 to 12 inches are more normal and considered to a good sized adult fish.

The anatomy of the San Francisco Piranha is very similar to other members of its genus, most notably the Red-Bellied Piranha, as you might expect. 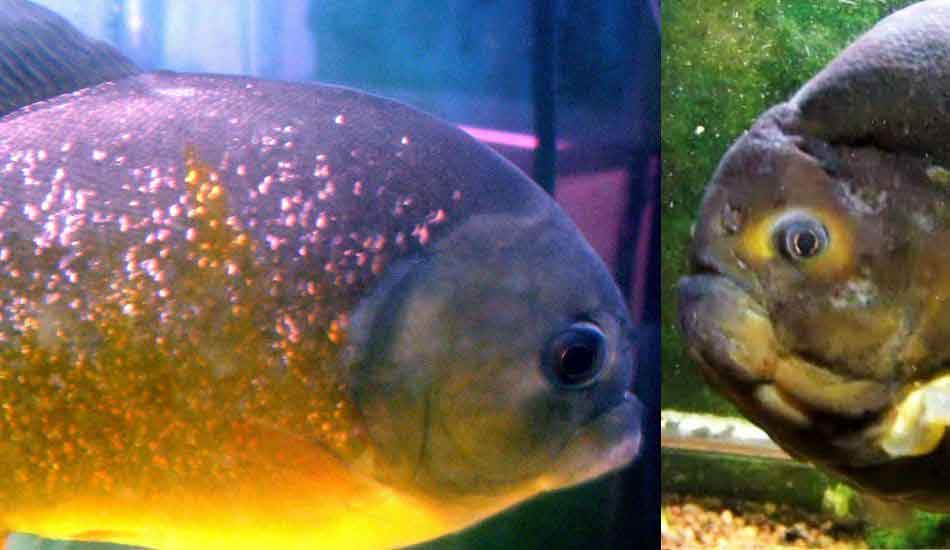 It possess a steep forehead if looked at from the front and you can see the powerful jaw that protrudes.

They have very large eyes that are silver colored with a tufted adipose fin. It’s body is chunky and muscular.

The body of the fish, along with fins can range from pale yellow to a crimson red, giving it the look of flames sometimes. These ‘flames’ can even extend beyond the lateral line of the fish, which is unusual.

So, the most common way to recognise this fish as an adult is;

Females will sometimes be larger than the males, especially around breeding season when the female will take on a more fuller figure.

The San Francisco Piranha, is, rather surprisingly restricted to the clean waters of the São Francisco river in eastern Brazil. It is not present in the main Amazon river.

Additionally it can be found in all the local tributaries of the rio São Francisco, such as the rios das Velhas and Grande. Also in the state of Bahia, near Feira de Santana is the Pedra do Cavalo reservoir where they are said to have been locally introduced.

It has also been witnessed in the smaller river channels of the region, and any floodplain lake that forms during the wet season.

So, while restricted to north east Brazil, and not being common as an aquarium fish, not a great deal is known about their preferred breeding habits.

It is speculated that it may employ similar traits to that of its more common pygocentrus genus, the pygocentrus nattereri (Red-Bellied Piranha). They are said to have two very specific breeding periods while in the wild.

They are likely to seek out similar areas for breeding, namely flooded vegetation that provides adequate sustenance for the juvenile Piranha and provides good defence for the parental oversight.

They are said to prefer the deeper parts of the river, where eddies form in the slack water. They will seek the natural cover of foliage, as do a lot of Piranha species. 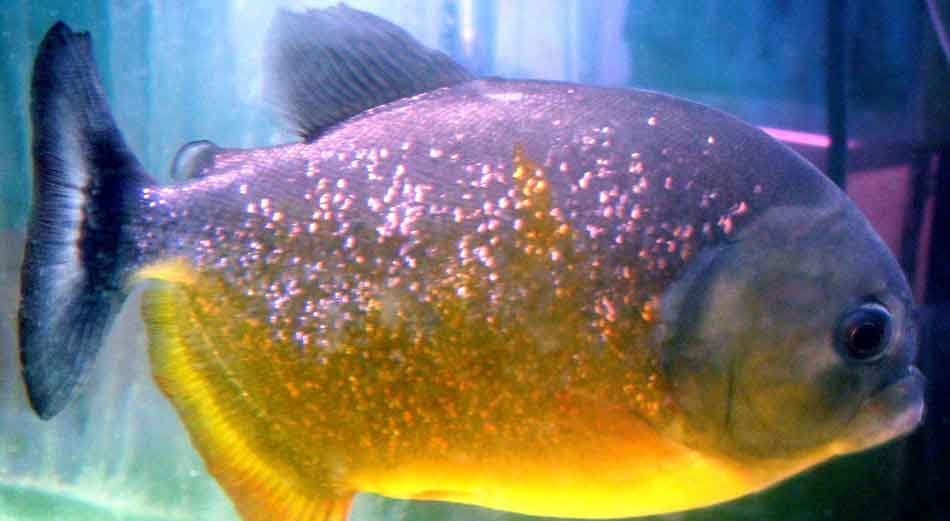 The diet consists of many of the same invertebrates, crustaceans and vegetation as other Piranha. As mentioned previously, they are an omnivorous fish.

In their natural habitat, their diet is surmised to consist of worms, insects, crustaceans, fish, fruits, seeds and nuts. They will take small mammals and birds, but larger animals are usually left alone, unless fatally injured or wounded.

The San Francisco Piranha is said to like a like of other fish, and hunts them in the wild for an occasional meat based diet.

A good example of that is shrimp, which once thawed out are an excellent food source for almost all the pygocentrus genus of fish.

The San Francisco Piranha In An Aquarium

As a general rule for Piranha the size of the tank is determined by the 20 gallons per fish. That is, if you wish to keep 7 Red-Bellied Piranha, the minimum tank you should be thinking about is 140 gallons in size.

Largely this is still true for the San Francisco Piranha, but this particular species is thought to be slightly more territorial so erring on the side of caution would be the recommended approach.

These are bigger fish than the Red-Bellied Piranha, and a black Piranha is a solo fish. If you wish to keep the San Francisco Piranha, a larger tank is sensible. It can be tolerant of its own species but only if there is plenty of space.

Start to think 40 gallons per fish, with good clean flowing water and you will go considerably to reducing the stress levels of this fish. It can be aggressive if it is stressed, which a small tank will undoubtedly cause.

They hide and move in foliage in the wild so a well decorated tank is also required. They can be quite shy and timid, unless stressed so you need somewhere for them to retire to and rest, as well as get away from noise and disturbance.

When picking the number for the aquarium, it’s advisable to have a large tank with a few fish, say 3 or 4, or a solo fish/ They will get aggressive if placed in a confined environment, and this species is considered cannibalistic when stressed due to territoriality. 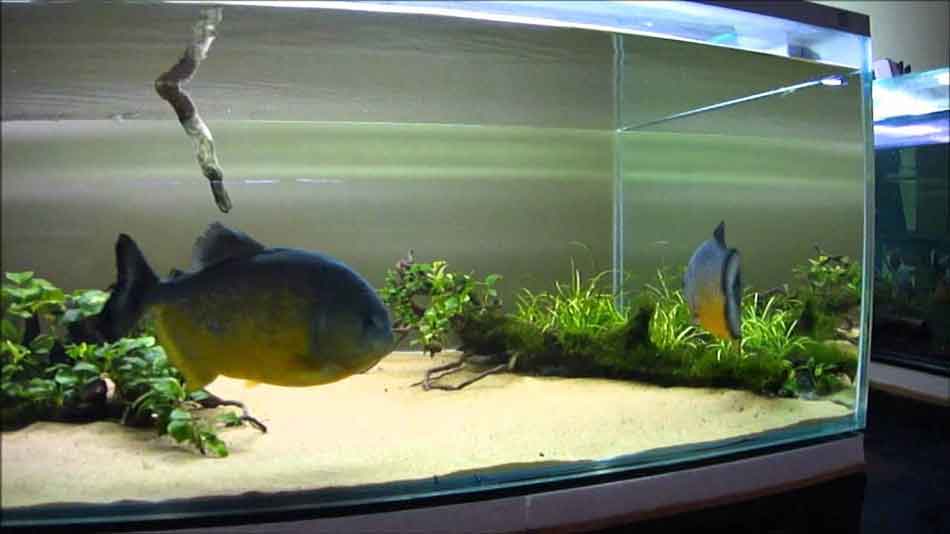 The water conditions, are intended to replicate the São Francisco river. Always go for clean, well filtered water, with a mild current.

If you are a beginner, then it is probably better to begin with a solo fish, rather than a small school. Keep them well fed, and do not keep other fish in the tank.

Get a large tank, keep the water very clean with regular changes and make sure you have more than adequate filtration.

Mature adult fish in small limited spaces will get very stressed and will there will probably be a tank fatality if they are too confined.

Place no other species in the tank with pygocentrus Piraya, as they will in all likelihood be attacked. 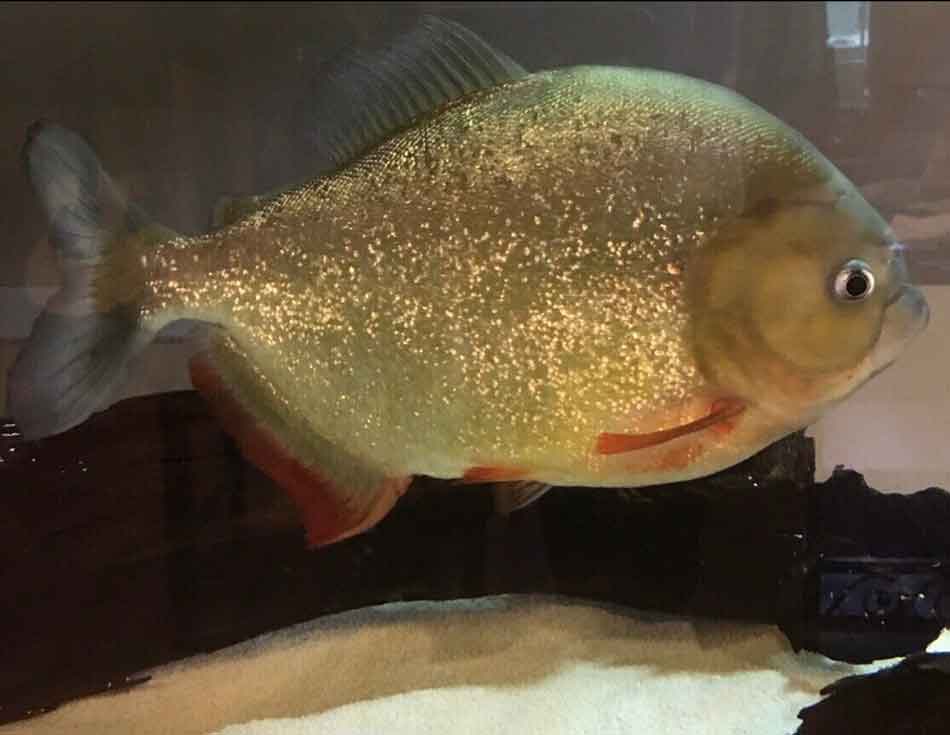 Although you can have a bare bottomed tank, it is not ideal, and doesn’t look like its natural habitat. Most standard substrates will do, as will gravel. Plenty of decoration for the fish to hide, or get away from bright lights is always advisable. There needs to be somewhere sheltered and covered for them to rest.

Pygocentrus Piraya is considered a messy fish, even by Piranha standards, so weekly water replacements is recommended of 30 to 50% of the tank volume. Also a very good filtration system is necessary for the same reason.

Always take extreme precaution with this fish, shy and retiring it might be but if it suspects it is being attacked it can put on quite a burst of speed, and has a bite power to match.

Of all the pygocentrus genus of Piranha, the San Francisco Piranha is undoubtedly the biggest. It is also not that common as an aquarium fish, and restricted to the São Francisco river, it’s basin and available tributaries and floodplains.

The fish is uniquely identifiable with its flame color markings and the tufted adipose fin. It has large silvery eyes.

It is a hardy fish, capable of living in rough conditions but prefers good clean water, with a mild current. Being a large fish, any aquarium that houses this fish should be large with only a few fish in it, as when stressed with confinement they can turn cannibalistic and aggressive.

If you want one of these fish, they can be relatively expensive compared to the Red-Bellied Piranha. With Red-Bellies you would expect to pay $120 for 10 fish, but they are bred in captivity.

The San Francisco Piranha is not, and fish normally have to be imported. As such, expect to pay up to $100 for every 2 inches of fish. For three fish, around 6 inches each you could expect to pay around $1000.

As a final note, although they are considered a timid fish, as with all Piranha they are not defenseless, and taking liberties or losing respect with the fish can cause injury. Treat the fish with the respect it deserves, it is a Piranha after all. They can put on quick burst of speed, and their bite is more powerful than the Red-Bellied Piranha, so you could easily lose a finger tip if you scare them into an attack to defend themselves.