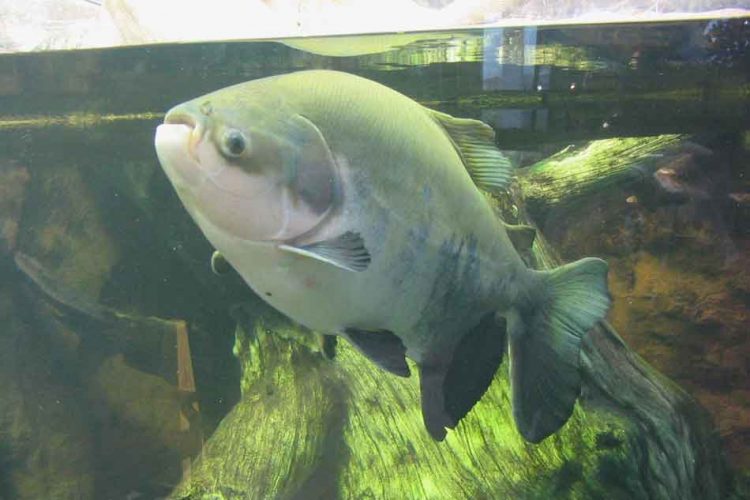 This question is mainly asked by people largely concerned with being injured while feeding their Piranha. The thought of being severely bitten is something to avoid.

So, do Piranhas jump out of the water? In short, yes they can but they don’t as a preference. They are not known for leaping clear of the water. Owners do report ‘bumps’ and ‘knocks’ occasionally but this is because they think they have startled the fish, and it reacted unconsciously. With proper procedures a Piranha will not leap out of the water causing you injury. Transferring fish, cleaning the aquarium and feeding can all be done quite easily without worrying about being bitten.

Why This Question Is Important

The Piranha have razor sharp teeth. They are interlocking and coupled with a powerful bite. They often go around in schools and are known for their ferocious frenzies so worrying about being injured doesn’t seem to be a natural concern.

However, the fear comes mainly from myths about Piranha, rather than the reality. They are not cuddly or innocuous fish, but neither are they defencless when they perceive themselves to be under threat.

While it’s an interesting premise to ask whether they do it in the wild, the truth it is rarely asked about in those circumstances. Most people want to know if they jump out of the water because their hand might be going near them.

The main reasons people might need to have their hands near a Piranha, and thus have reason to fear a leaping Piranha are;

Transferring Piranha: Whether changing tank, buying Piranha or repairing a tank, your Piranha will need to be temporarily in some sort of contained vessel, usually a handled bucket. Moving them around before placing them might mean your hand is in close proximity to water.

Aquarium cleaning: Every week you will need to remove 10 to 15% of the water, and you will occasionally need to vacuum the gravel, or clean the glass. It makes a big difference if Piranha are in your tank, rather than guppies or tetras.

Feeding: While dropping in fruits, insects, worms or seeds the thought of a ferocious Piranha leaping out the tank is something that worries beginner Piranha keepers.

Most people are only worried when they are talking about owning Red-Bellied Piranha. Nobody is too worried about leaping herbivore Piranhas. 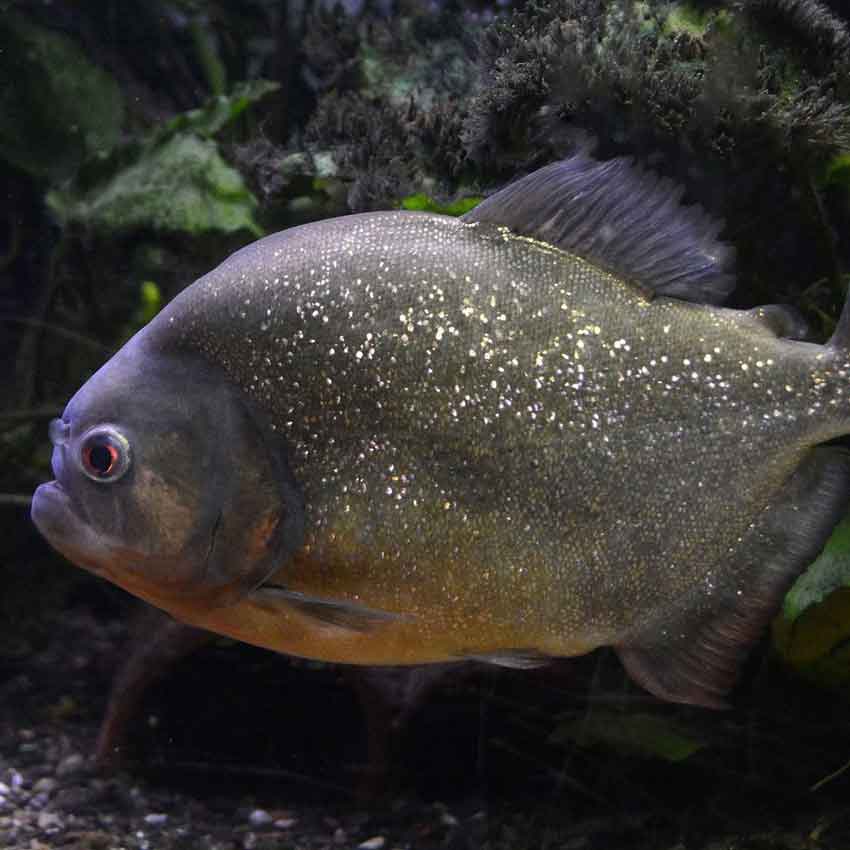 How Far Can They Leap Out?

While it is not a scientific study, the general consensus appears to be that they rarely, if ever, leap and clear the water. That means that handling a bucket with Piranha in it, you should be OK.

They are not a jumping species by nature, but quite a lot of fish species, Piranha included, leap to clear themselves of parasites. Another good reason to keep your water in as good a condition as you can.

They are naturally a shy and timid fish, even in the wild, and shy away from larger animals. They seek foliage for shelter and swim in schools for protection so leaping isn’t a large part of their lifestyle.

Nevertheless, in an aquarium where there is natural confinement, there are plenty of owners who report their Piranha making a leap out the water. Usually it’s because they have been startled and made them fear for their lives.

Some have reported small bites, nothing fatal or worry about unduly, but it is a reminder to always have your wits about you when dealing with these fish. Very experienced fish keepers still have to be careful.

As discussed, it is not a common occurrence to see Piranha leaping, they aren’t a naturally leaping species, yet on an individual basis, especially if they are stressed or frightened, they can.

Although, they are not known for clearing the water, that is putting air between their body and the water surface.

So, when transferring Piranha in a bucket, say a 5 gallon bucket, there is no need to fill it right to the top. Put a reasonable difference between the handhe and the water surface and you should be fine.

The aquarium, should not be filled right to the brim, and a good cover should be applied. Keep plenty of foliage so a wary Piranha can retreat rather than be forced to attack. There are a lot of youtube Piranha keepers with not enough foliage in the tank. Additionally keep the light levels low, and don’t illuminate the tank too harshly. That might be what is causing the stress.

Make sure the aquarium is of sufficient size. Too small an aquarium produces stress and makes them more combative.

A good gravel vacuum so your hand is nowhere near the water can be used as well, if you don’t want to transfer the fish to a temporary vessel.

Keep your Piranha healthy, the water clean, well fed and try to replicate their natural habitat so they feel as safe as possible. That will reduce their inclination to dart around and thus reduce their chances of leaping to attack. 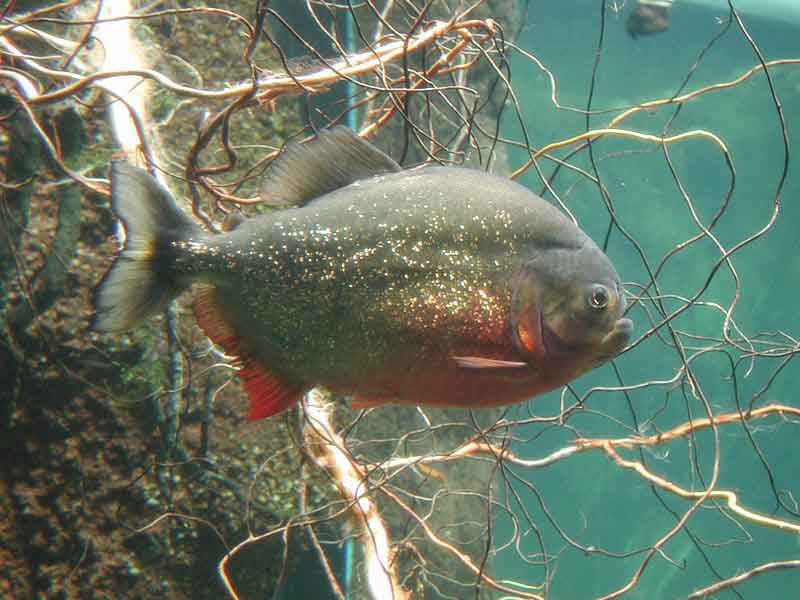 In the wild, people have mentioned it looks like Piranha leap in a frenzy. Theodore Roosevelt in his famous book ‘Into The Brazilian Wilderness’ described them as a crazy fish that would leap clear of the water.

During a frenzy, something you should not really see in an aquarium. The attacks on a large piece of meat can cause a ferocious frenzy. Especially in the low season when there is food scarcity and Piranha are stressed, desperate for food.

The attack can look spectacular. Take a look at this;

Won’t see a frenzy in an aquarium. You should not really have enough Piranha in the tank to cause the problem. You might see them all attack a piece of meat but there should be enough room, so they won’t be leaping out of the water.

While there have been incidents of leaping Piranha injuring owners they aren’t known for leaping and clearing the water. They are powerful fish, so never say never, but if you never saw it while owning Piranha it wouldn’t be uncommon.

Especially if they are kept correctly and are healthy.

So they do leap, but it appears to be more from having been startled rather than to attack. If you can avoid startling them you are drastically reducing the chances of an incident, which are low enough already.

Piranhas owners do not routinely talk about being nipped by their fish. It is a naturally shy and timid fish , and as a preference will hide and wait out the threat. So provide plenty of cover for them to retreat to.

However, use your common sense, this is a toothed fish. While there is a small danger, it is best not to get complacent and dangle food in their view as if taunting them. When you put food in the water, get your hand far away from the surface. Feed them properly.

I’ve heard a few reports where a 7 inch Red-Bellied Piranha can sometimes get 3 to 4 inches out of the water. Just it’s head only, not a leap.

Piranha, certainly the Red-Bellied are much happier in groups, and as an owner you need to keep their stress levels low. Erratic darting and jumping probably indicates too much stress, so check the tank size (60 gallons or more), whether there is enough foliage cover, water conditions, and whether there is too much bright light,

Sometimes, without the best conditions they have a stressed flight response to what they perceive is a large predator if you are near the tank.

If you are still worried, and I don’t think anyone would blame you, then amazon sell mesh gloves designed prevent cuts.

If it settles the mind, this is a useful video to watch;