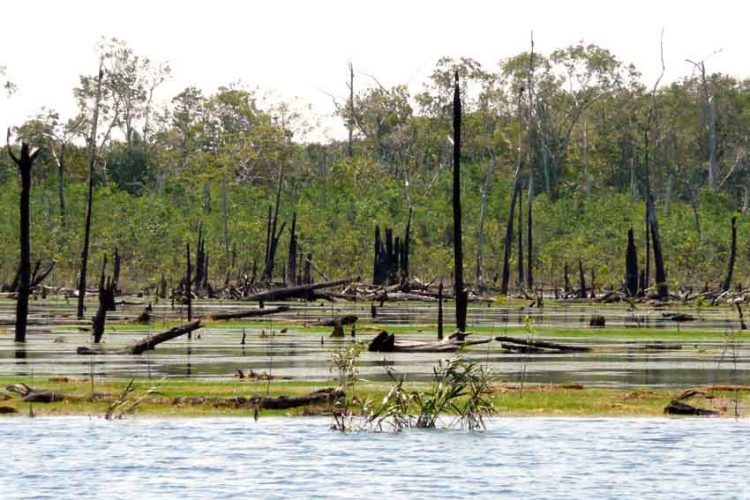 Although indigenous to the Amazon basin, Piranha are widely distributed throughout it. There are many different types of waterways and natural habitats, in many different countries. So where do Piranha preferentially reside?

In short, all the water types, from river and lakes to creeks and floodplains contain Piranha. It is a hardy and widespread species. Most species stick to a single ecosystem, but the Red-Bellied Piranha is the most widespread. They prefer slower moving water and seek foliage for protection. Floodplains, while being excellent areas during the wet season become less so as the water recedes and leaves Piranha more vulnerable to predators.

They Are Indigenous to the Amazon Basin

The Piranha is to be found in Latin America only. They are found in the Amazon River system and its tributaries, the Orinoco, Guianas, Paraguay as well as the Sao Francisco River Systems. The richness of species in these regions vary from one river system to another, depending on the specific conditions that exist..

Most of the species are restricted to one river system, with the Red-Bellied Piranha being found in more than one river system around the region. The countries covered by these river systems include Brazil, Bolivia, Colombia, Ecuador, Guyana, and Peru. Suriname and Venezuela.

The Piranha lives in the fresh waters of the Amazon with other species preferring the clear waters, although they can happily thrive in the murky waters.

Common habitats include streams, tributaries, creeks, lakes, rivers, wetlands, flooded regions, and ponds. The Amazon rainforest is known to be surrounded with thick vegetation that creates canopies over the waterways, with little light reaching the water below the towering trees.

The waters, therefore, can be dark, which is conducive for hiding spots for the Piranha from predators such as the caimans, crocs, dolphins and the birds.

Where Are Piranha Distributed

The Piranha is exclusively a freshwater fish that are distributed in the Amazon basin which includes all the river systems therein. The Amazon River, the Orinoco, the Guianas, the Sao Francisco and Paraguay rivers will find Piranha present. Most species inhabit one river system only, except the Red-Bellied Piranha – that is found in many river systems in the Amazon.

Which is typical. The most aggressive of the Piranha family is the most widely distributed.

There have been the discovery discoveries of Piranha in the distant region such as River Kaptai in Bangladesh, which is attributed to released fish into the waterways by poachers who might have been escaping law enforcement officers.

Aquarium Piranha have been introduced in other parts of the world by people who keep them as pets, and for residing at zoos. However, in the US, some states prohibit the keeping of Piranha in captivity, and one ought to check with the authorities before keeping Piranha in aquariums.

Where In the Amazon Basin Do You Find Piranha

The Amazon basin is a complicated and diverse ecosystem. Within it, there are many types of waterways and Piranha seem to reside in all of them. Broadly speaking, they reside in the fast flowing rivers, the still or slow moving shallow creeks, the large lakes and the plains that form during the rainy season.

The rivers, streams and the tributaries in the Amazon mainly have fresh water that is conducive for the survival of the Piranha fish. Moreover, the rivers contain warm and clean water that refreshed anew with each rainy season.

The rivers and tributaries in the Amazon contain plants and foliage that act as hiding ground for the fish against predators. They are also natural areas for reproduction during the mating season. The mud found on these rivers is essential in building breeding nests during the rainy season.

The rivers also contain most of the Piranha prey such as smaller fish, amphibians, worms and plants that are part of the diet of a typical Piranha fish. Trees near these rivers host birds that often produce a good meal for the Piranha. They love sitting below the trees waiting for the juvenile birds and the eggs that fall into the water.

These systems are rich in food and cover. They are also safer during the dry season, with less chance of drying out.

Creeks are shallow streams of water flowing into a river or a channel into a marsh. Creeks are mostly found at inlets of rivers and are sheltered waterways. Creeks are typically found along the tributaries of most rivers in the Amazon, with its waters flowing slowly; thus there is virulent vegetation growth in these areas. 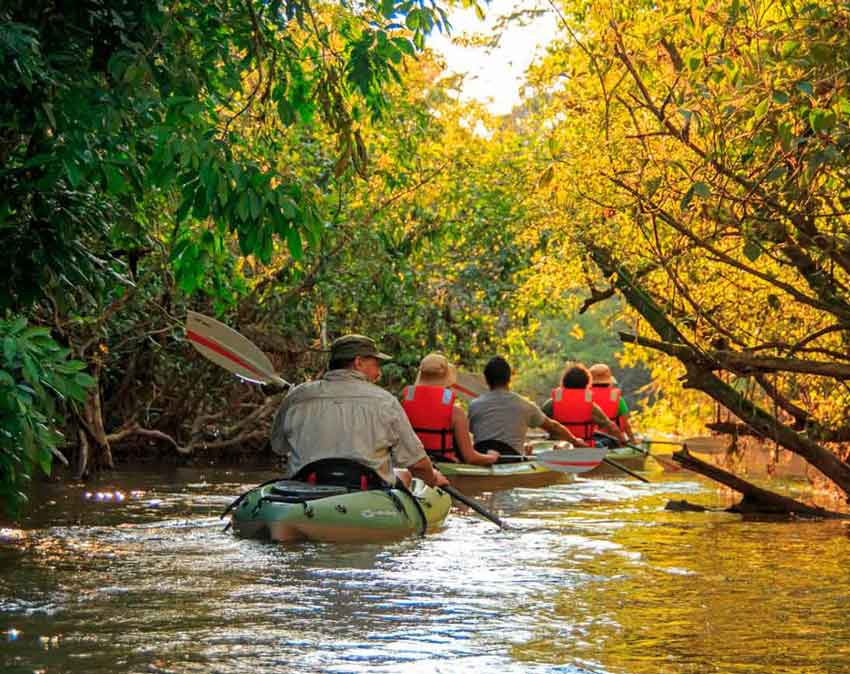 The creeks are a good breeding ground for the Piranha as it has adequate mud that is useful in building nests for the young ones and plants to anchor the eggs in place. The fry and the juvenile Piranha fish needs the foliage to hide from predators, as they not yet adept at survival on their own.

Creeks are an essential part of the survival for the Piranha species as they are a good a breeding ground but many predators, such as big cats come to drink at these slower moving waterways.

The Amazon is famous for its rivers, but there is less documented information on the lakes in the region. Most lakes here are Ox-bow lakes that are formed when a river fails to cut through hard rock but navigates around it leading to stagnant water and thus forms a lake.

During the dry spell in the Amazon region, the water levels in most streams and tributaries get very low resulting in a scarcity of food. The lakes on the other hand during the dry season contain reasonable food supplies as the water levels remain almost the same. The piranha will swim around the lake where they find food.

Rich foliage areas, and where fruits and birds drop into the water,

They eat the insects, crustaceans and other smaller fish found in the lake during the dry season. The food scarcity is characterized by an increase in Piranha aggression and cannibalism.

Every year, over 250,000 km2 of Amazon floodplain forests are covered by water that overflows from rivers, essentially creating underwater forests. The flooding occurs due to the seasonal rainfall and many rivers burst their banks. Rainfall flooded areas extend about 20 km from the river and during the wet season, these may rise between 7.5 m and 15 m.

That’s quite a lot of water discharge and provides much roaming experiences for the Piranha. Floodplains are around 4% of the Amazon basin area.

The wetlands and the flood plains such as ‘Varzea forests’ contain worms that are an excellent food for the Piranha. 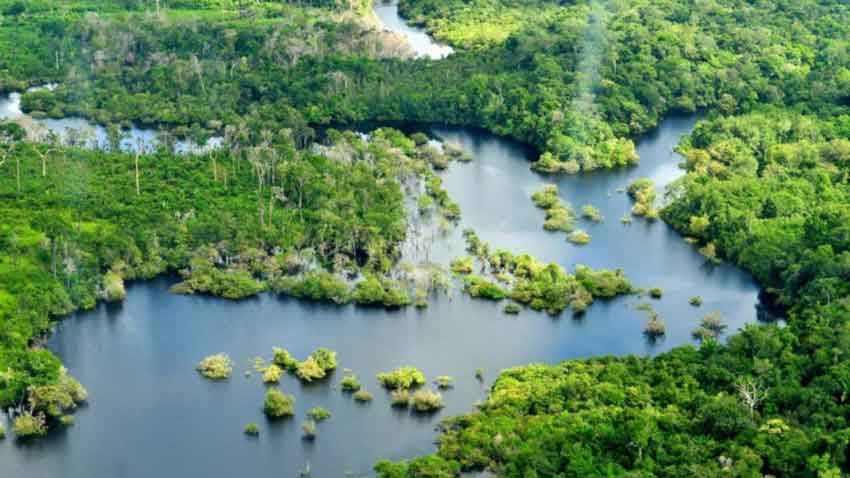 Wetlands are characterized by plants that grow tall making it a good hiding ground from predators. There is a lot of underwater foliage and piranha flourish here, with the protection. The flood plains still have predators for the Piranha though, such as the caimans and crocs as well as the storks that live in the Amazon.

As the rainy season resides though, and water levels fall, the Piranha fish that are stuck in the wetlands are exposed to the predators such as the jaguars, caimans, and birds found in the Amazon. This is a dangerous time for Piranha and the dangers of residing in the floodplains outweigh the benefits for the Piranha fish.

The Piranha thrives in warm water as they are adapted to the warm climate prevalent in the Amazon region. Coldness can kill the fish.

The Piranha fish is a cold-blooded creature that gets their energy from the surrounding water. Thus low temperatures would kill them as they are deprived of their energy. The fish also does well in fresh water which could explain the reason why they are confined in the Amazon basin and why they do not drift away to the salty ocean.

The Amazon in rich is different species of trees and animal life; Piranha are a non-discriminatory feeder that will eat seeds, fruits, plants as well as small fish, crustaceans and insects. They are heavy, messy feeders and will thrive in an ecological system that contains enough food. When there is food shortage during the dry season, Piranha show signs of cannibalism.

Natural cover such as river foliage are grounds for hiding from the many predators that are found in the Amazon basin. The Piranha fish is a shy timid fish that will swim away when they are approached by large animals. Any natural cover will be a habitat for this fish. The natural cover ensures that there is enough rotting material that can make the water slightly acidic, which is conducive for the survival of the Piranha fish.

Do They Prefer Fast or Slow Water?

Most Piranha fish found in the Amazon region inhabit still waters. They have muscular bodies which enable them to power their way through slow water. Moreover, slow water is conducive for their feeding behavior as they can easily detect movement of weak animals in the water and feed on them.

They can also hear the noises made by falling fruits better which make a good meal for the fish; it is easy to get food in slower moving water. The eggs or juvenile Piranha could easily be carried away by fast-moving water as they are tiny and measure a few grams. They are not strong enough against powerful currents.

Blood, a natural attractant for Piranha also diffuses better in slow or non moving water. This allows the Piranha to move aggressively towards a perceived victim.

Do Piranha Roam or Migrate?

Piranha are a non migratory fish, they will live in one river system throughout their entire lives. Once a species is born or inhabits a certain part of the Amazon basin they are not likely to move to other areas. The Piranha will, however, move to seek conditions that are conducive for breeding as well as spawning during the mating season during the start of the rainy season.

The Piranha is a scavenger, found in all Amazon regions and will move from their nests during the dry time of year when food is scarce in their territory.

Piranha that were documented to have attacked swimmers in Suriname had probably moved out of their territory in search of food. Or they were defending their breeding grounds. The Red-Bellied Piranha is sometimes said to be migratory as it is found in almost all river systems in the Amazon, but this is not yet proved to be true.

Piranha fish are found in South America in the Amazon Basin; they inhabit the warm waters of the Amazon River. The Piranha is a cold-blooded animal that thrives with the warmth from the waters, they will perish when exposed to cold waters.

Piranha prefer living in areas with slow-moving water, as they have high, broad, muscular bodies which allow them to move swiftly in slow-moving water. They are not a migratory fish as each species will have a different system it is flourishing in. The Red-Bellied Piranha, the most widespread,  is often thought to be migratory, but this remains to be a myth as it has not been proved to be true.

Piranha will live in the rivers, tributaries, wetlands and the creeks of the Amazon region that are conducive for their survival. They will look for good breeding sites in these territories as well as seek shelter from predators. The fish is well-suited for survival in the Amazon basin and can do well in aquariums provided that they get adequate replicate conditions that enable them to thrive.