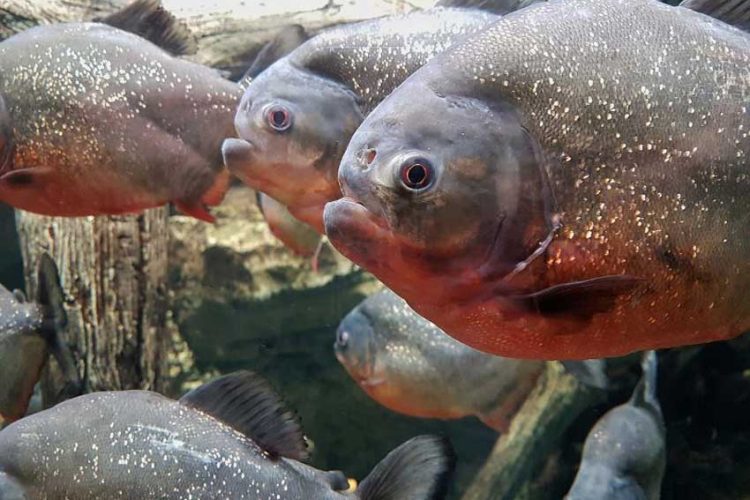 Fish as a species can either swim alone, or they can swim together collectively as a group. The tendency towards groupings can have many benefits for fish swimming as a pack.

So, so Piranhas swim in schools? In short, yes, some species of Piranha exhibit schooling behavior. There are usually around and upwards of 20 fish per shoal. A school or shoal is a loose term for Piranhas coming together as a group in order to better evade predators. A 2005 study found that Red-Bellied Piranha are far less stressed when present with other members of the same species, whereas black Piranha are solo fish, and will attack other black Piranha if kept in the same tank. In general the term shoal refers to the loose grouping of fish, but school behaves with more synchronized behavior, an effective response to a predator threat.

As a species of fish Piranha are primarily known for their teeth, and comes with a ferocious reputation, and stemming from the Brazilian for ‘tooth fish’ these fears can sometimes be realized.

However, contrary to popular opinion, Piranha are actually quite shy and timid as a fish, and in a further twist are actually omnivorous rather than predominantly carnivorous.

When talking about Piranha schooling behavior, it is important to realize that the term refers to between 30 to 60 species. The classification is changing, with some genus, like the pygocentrus being termed ‘true Piranha’ as opposed to the Wimple Piranha, specifically from the Catopion genus.

The two popular genus of Piranha for the purposes of ownership are Pygocentrus and Serrasalmus, with the Red-Bellied Piranha (Pygocentrus natterei) being the most common in the wild, the most aggressive of the genus and the most commonly owned as an aquarium fish. 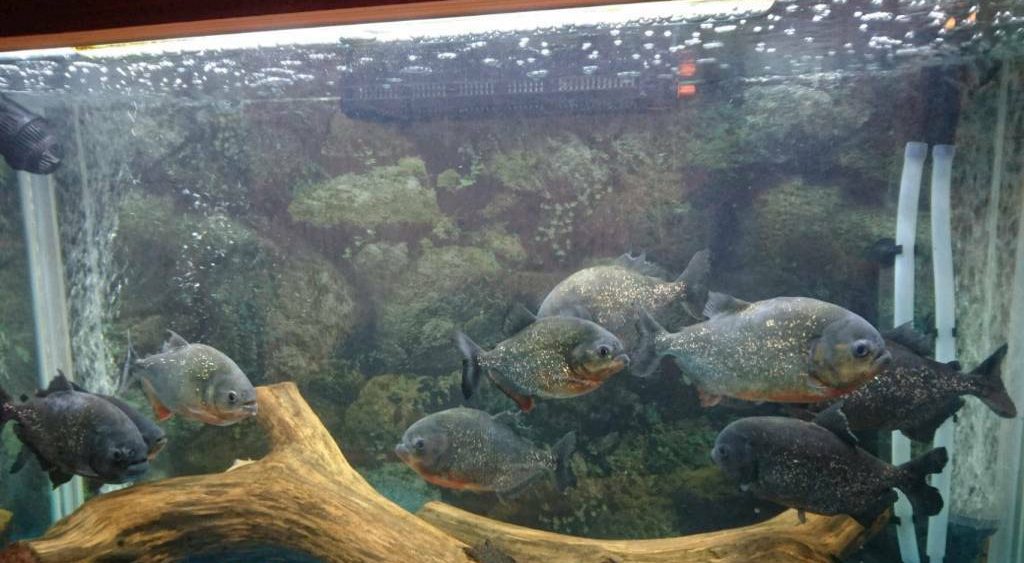 Almost everybody will know that Piranha are a fish with teeth, and to emphasize their reputation is the knowledge is that they travel in packs, called schools or shoals. Red-Bellied Piranhas particularly hold this reputation.

Go to any aquarium in a zoo that houses Piranha and the Red-Bellied Piranha will be swimming around together. Scientists have discovered that they do this as a means of defense, not as an attack mechanism. The Piranha has many predators, and this behavior helps evade them.

Piranha are hunted by many efficient predators. Caimans, river dolphins, and birds all feed on the fish so having many pairs of eyes looking out for the masses. 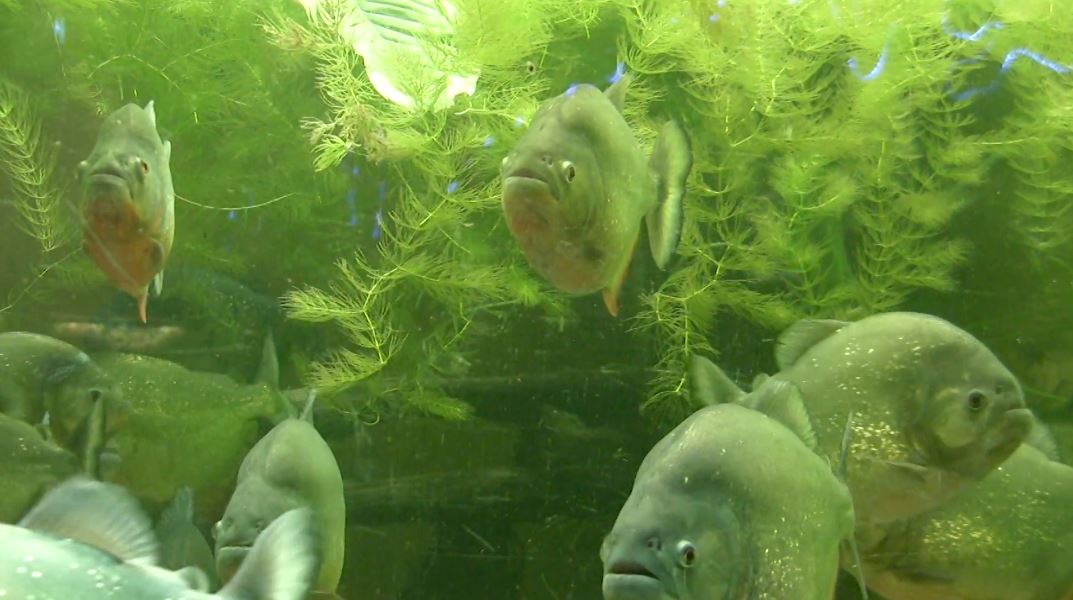 The Red-Bellied Is A Schooling Fish

In 2005, a fascinating study was performed. The scientists studied captive Red-Bellied Piranha and their response to simulated predator attacks.

They found the Piranhas in larger groups were much less stressed, and felt much safer. They also found the response to the attack was performed much more calmly the more piranha there were in the school.

Interestingly, when waters become shallow, thus making Piranhas more vulnerable to attack from above, and making them more visible, the schools increase in size.

This is important for those wanting to own and care for Piranhas in a home aquarium. Red-Bellied Piranha need to placed with other fish of the same species. A single Red-Bellied Piranha may well be a stressed fish. A large tank and a small school seems to be a good compromise.

General Shoaling In An Aquarium

The word school or shoal when applied to fish, especially Piranha tends to describe a group of the same sized species, brought up together swimming as one. In the wild juvenile Piranha can form huge shoals initially as they are particularly vulnerable and not yet adept at remaining cautious.

Piranhas are said to shoal or school, for the purpose of forming groups around a common predator threat. They all have a common problem and forming a school is the instinctive solution.

The pygocentrus genus, a group that contains the famous Red-Bellied Piranha, are in this genus because of their tendency to shoal.

The conundrum for the hobbyist is that you can control the environment, So placing fish into a tank, that haven’t naturally chosen to be together is forcing a situation. It often works with Red-Bellies but does not work well for black Piranha, that prefer to travel solo.

Thus the word ‘school’ or ‘shoal’ when applied to a home aquarium should only be used in a loose sense.

If you think all Piranha will shoal, or are likely to form loose groups you would be wrong. Put 2 black Piranhas in a tank together and you are likely to find that out the hard way.

Even in a large tank, if 2 black Piranhas have the same water space, one of them is likely to end up a fatality. Black Piranha should be kept without tank mates. They are naturally aggressive to their own species.

Black Piranhas are often found in murkier water. Maybe this aids them in defense as much as a shoal might in clear water, thus they feel more secure in being alone. 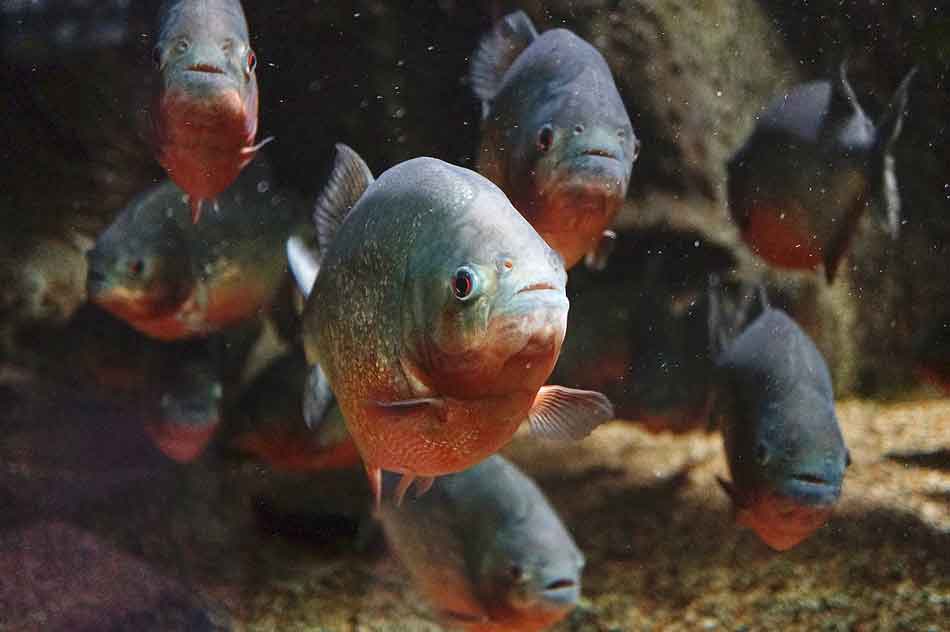 While a school of fish, often moving with unknown synchronicity are often a mesmerizing sight. A school of Piranha can also be somewhat intimidating at the same time.

While there are two types of schooling behavior, with schools and shoals being slightly different as terms. A shoal is a loose group of fish, which can sometimes include different species. They do not display organized behavior.

Schools are much more organized and structured, like military unit. The group moves with much more of a common purpose.

They are often interchangeable in terms, and often the same group of Piranha will exhibit one style of behaviour and then switch to another, depending upon any perceived threats.