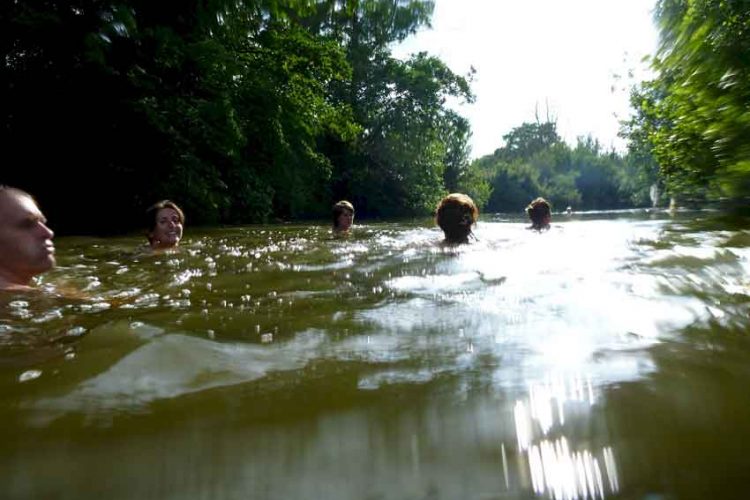 With the Piranha being considered a dangerous fish, an interesting question arises. How would you go about crossing a section of water, known to contain Piranha fish? Is it possible and can you do it safely?

In short, you can yes. While nothing is guaranteed, there is a preferential strategy to make sure you make it across the river or water obstacle. You can play known facts to give yourself an advantage and provided you are a competent swimmer the chances of making it across are quite good. As long as there is not a strong current then the Piranha can be avoided. However, Piranha are not the only predator in the Amazon rivers and you need to look out for them as well. 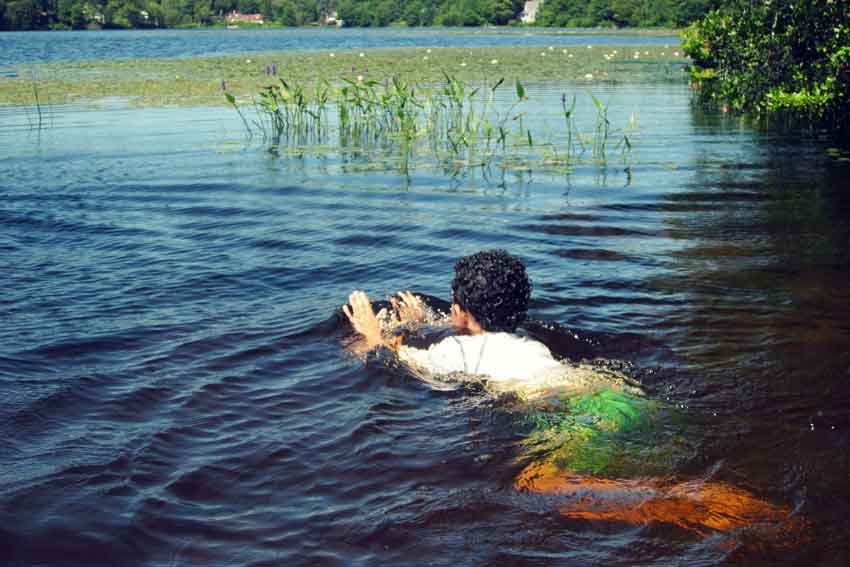 The myth that the Piranha is a dangerous and ferocious fish has been proven to be somewhat a myth, as around larger animals they are quite shy and aren’t dangerous. Nevertheless, I think everyone would understand you being nervous about to cross water known to contain Piranha.

Most Piranha are scavengers and omnivores that feed on almost anything ranging from plants to smaller fish and other sickly or dead animals in the rivers. Mostly their diet is crustaceans, insects, worms and fruit.

Piranha do not attack big animals as they think that large animals are predators, thus will rarely attack humans crossing a river. The only time Piranha are known to be more aggressive in South American waters is during the dry season when there is less food in the river. Also, when they are protecting their nests. Yes, the Piranha is a dutiful parent and guards their young.

Nevertheless, it would be prudent to get all available pertinent information. Ask locals if necessary.

The Amazon basin is home to many thousands, if not millions of fisherman who wade in and out of the Amazon waters all year round. Professional Brazilian swimmers have been known to use it for training practice.

How To Cross Piranha Infested Waters

Step 1: Familiarize Yourself with Piranha Territory

Piranha fish are found only in South America and around the Amazon basin. They are not indigenous anywhere else in the world. They have been found in other parts of the world but they are thought to have escaped captivity.

They live in the warm fresh waters of the Amazon Basin with cold or salty water proving fatal. If you visit the Amazon Basin, you should be cautious when crossing the waters which are most likely to be infested by piranha fish.

The best spot is somewhere reasonably fast. Not so fast that you would get carried away by currents, but the Piranha fish prefer slower water if possible. A bend in the river or a constriction provides faster paced water.

Avoid getting into the water around vegetation. Piranha naturally like cover, and you would not be disturbing them to get in on an open stretch of water.

In essence, pick an area of the river where they are not likely to be and enter the water where there is no protection for them. A floodplain with many tree roots is your worst area to cross because you would have no idea where to start. The shortest point across seems the most reasonable if that is the scenario. 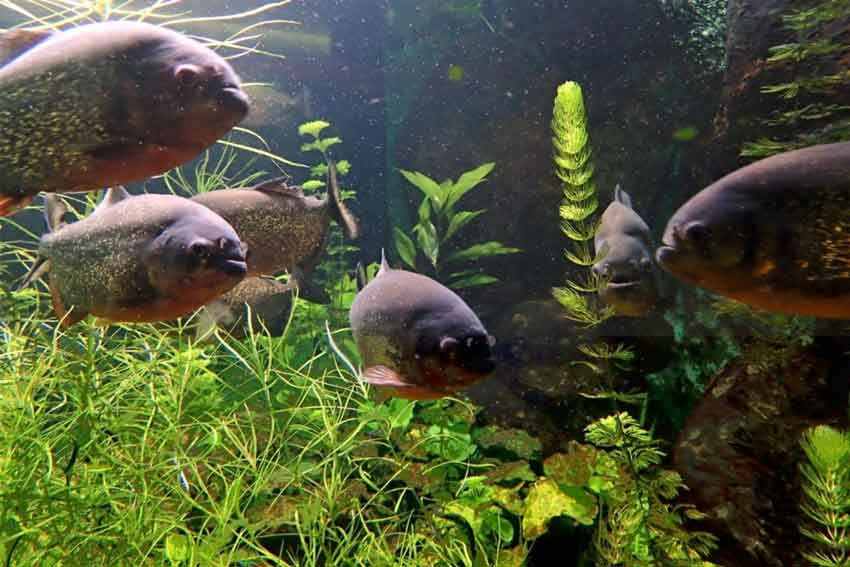 Step 2: Avoid Getting into the Water with an Open Wound or a Bleeding Cut

Piranha are more likely to attack larger animals that are bleeding. A Piranha can sense a drop of blood in the water per 200 liters. It’s also a known attractant to them.

Therefore it could not be prudent for you to dive into Piranha-infested waters if you have an open wound. Avoid carrying raw meat into the water, mammal or fish. You should also wash your hands if you had been handling fresh meat before crossing the river. Avoid washing your hands in places where Piranha live as that will attract the fish.

Wash dried blood off, or scar tissue if you can. Bind and area of concern to prevent water from soaking and diffusing a blood scent into the water,

Piranha will reside mostly under trees where they hope to catch falling eggs and birds, so stay away from those areas, where food may drop into the water. 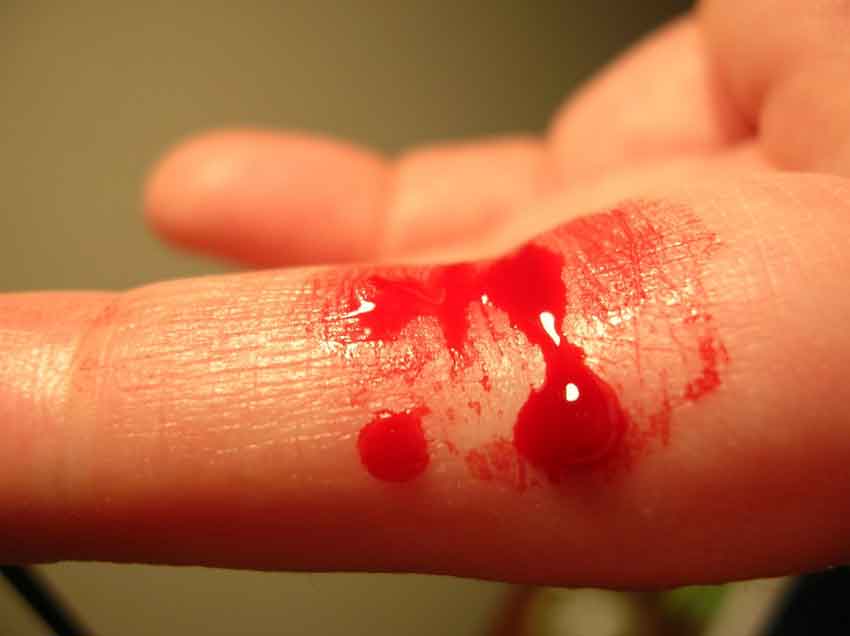 Studies show that Piranhas are attracted to noise, splashing of water and any other activity in the water that imitates distress. The sound of noise and splashing of water is also associated with falling fruits which make a big part of the Piranha diet.

You should, therefore, minimize movement when crossing Piranha-infested waters if you are crossing during the night ensure that you avoid talking, using lanterns and torches that might attract the Piranha to attack you.

The loss of symmetry in the water is the worst thing you can do. Swim smoothly and with a regular pattern. Sudden movements out of context alert predatory fish that an animal may be in distress. Study a scuba diver swimming and you see the easy, fluid motions that signal to other water users you are a big predator. Other animals will then give you a wide berth. 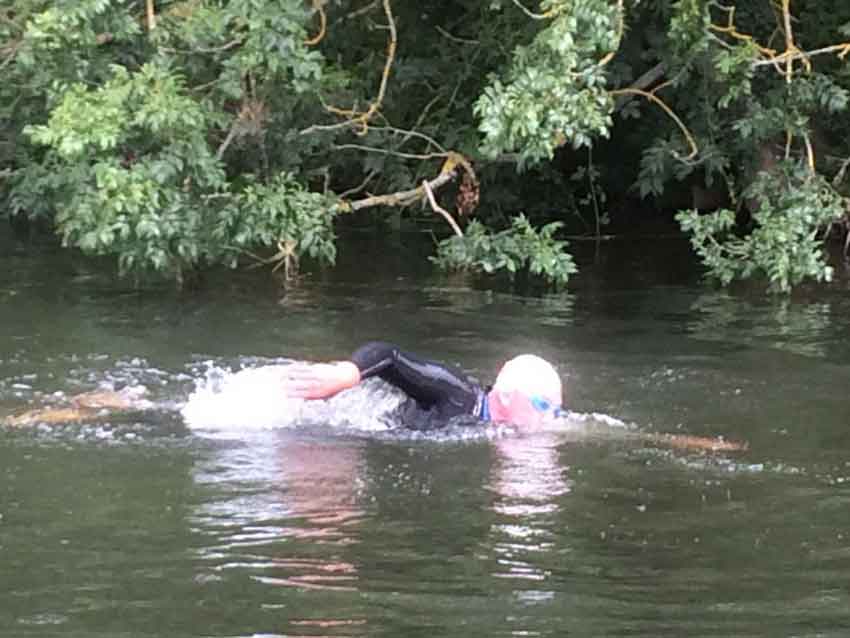 Step 4: Avoid Swimming in Piranha-Infested Waters During the Dry Season

Despite appearances and mythology the Piranha is a shy fish that rarely attacks larger animals except when they are starving. This happens a lot during the dry season when food is scarce in the Amazon region.

The Amazonian rainforest is known to have two seasons. The high water season, roughly from January to June is when rainfall increases and rivers fill, and become more navigable. Food is plentiful and your chances of starving Piranha are diminished.

From July to December though the low water season starts and rivers start to go to lower levels. Fish can find themselves marooned in little pools and become starved. There is food scarcity and the waters are murkier. 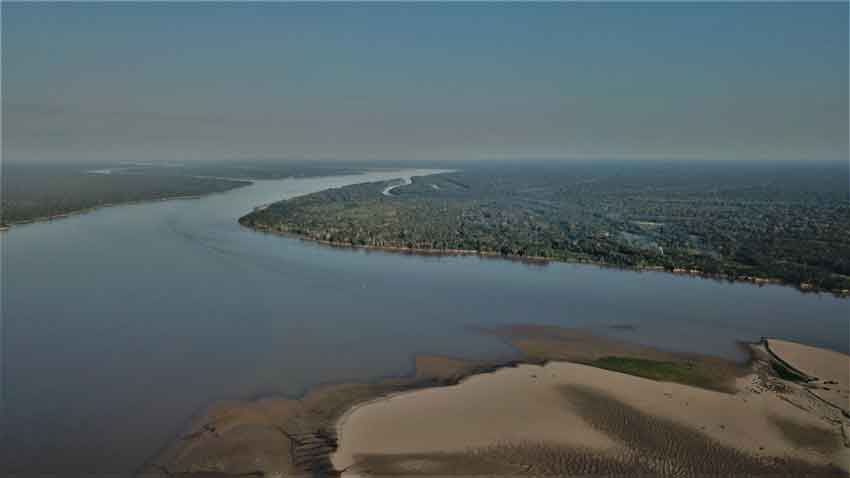 If you must dive into the Amazon Rivers during the dry season experts, you are advised to do so during the night as Piranhas tend to hunt during the day and sleep at night.

If you accidentally awaken the fish at night, they will not attack, but they will flee as they might think you are a predator. But remember that in the Amazon, other predators such as the Caimans could be active at night making the dangers involved at crossing a waterway a complicated affair. 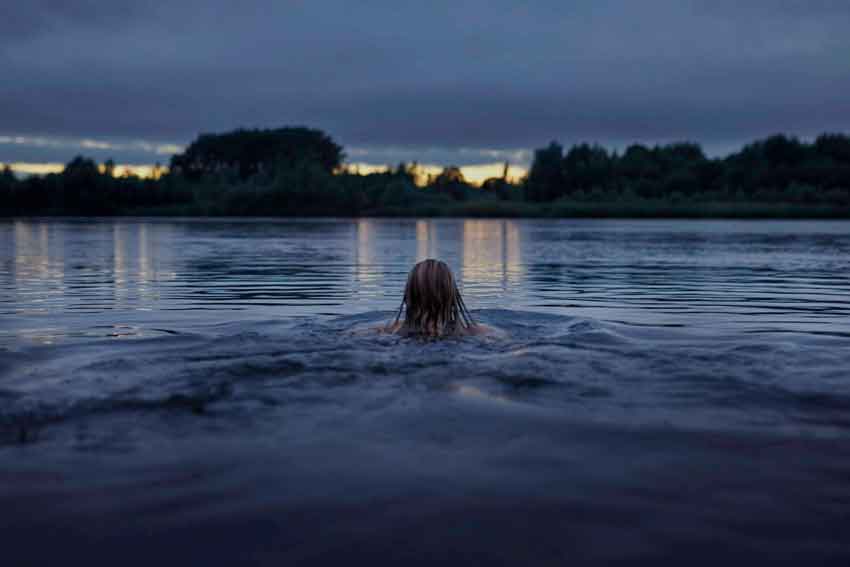 What Are Your Chances Of Making It?

If you are wondering if you will make it across a Piranha-infested waterway, it is a pretty good bet that you will cross safely. If you are a competent swimmer and are smooth and regular in your movements, the Piranha will give you a wide berth, even if they are hungry.

It is important to remember that Piranha rarely attack larger animals which are bigger than themselves as they view large animals as predators. Caimans and river dolphins are a constant threat to Piranha schools.

With caution you could well safely cross the riverways of the Amazon. You should keep in mind that Piranha are attracted to noise and blood in the water primarily. If you avoid these you should cross the river safely.

You should, however, be realistically aware of other predators found in the Amazon, such as the Caimans and the Crocs that could make crossing the Amazon rivers quite dangerous in other areas. Crocodiles and Caimans are proficient night hunters and have very good sight in the dark. They are a much bigger threat than the Piranha.

However, Piranha pose little danger to swimmers crossing the Amazon rivers unless they are hungry or they are provoked, In all cases of human attacks it is said to be more of a warning bite than an attack and they rarely, if ever attack and kill a living person.

Most people would naturally worry about their safety when they visit the Amazon Basin and have to cross a river. There are many predators, including the ferocious Piranha fish in this remote part of the world. But do Piranha pose a great danger to tourists when crossing the rivers?

Piranha will not attack animals larger than them, therefore, you should make it cross the Amazon waterways quite easily if you need to. Piranhas, however, can be provoked to bite people swimming and wading, if they are splashing around, making noise or if there is blood in the water.

During the dry period when there is less food in the ecosystem, Piranha are likely to bite large animals as they are desperate for food. There far more dangerous predators in the Amazon such as the Caimans and you should, therefore, take more caution in this remote part of the world.

You are probably be more likely to be bitten when wading into the water by unknowingly going over a Piranha nest, but your biggest threat is the Caimans, not the Piranha.