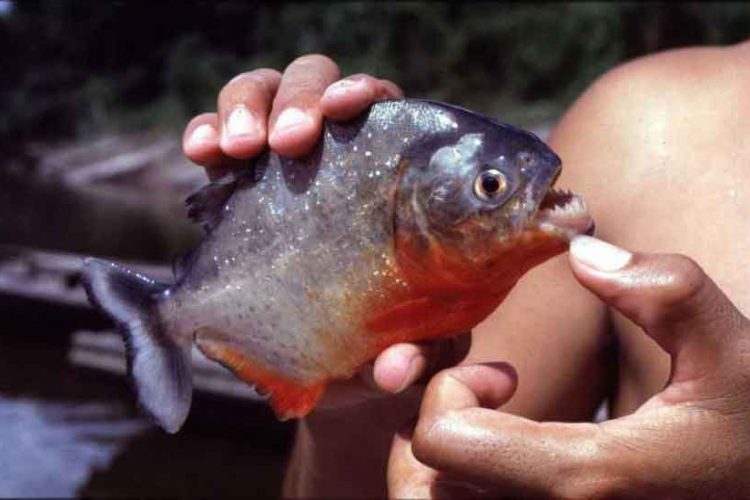 With razor sharp teeth and Hollywood scriptwriters doing the rest the Piranha has a reputation of vicious and bloodthirsty killer.  Apparently it devours anything that touches the water and leaves nothing but the bones. But is this true? Are they as dangerous as they are portrayed or have they been besmirched?

In short, while not the cuddliest of animals the Piranha is not the dangerous killer it is portrayed to be. Most are omnivores but even the most aggressive, the Red-Bellied Piranha is shy in the water and extremely wary of large mammals in the water. People quite happily swim and wade in the Amazon without fear. The truth is Piranha are rather more scared of you than you think. They are preyed upon by river dolphins and caiman so stay away from large animals in the water, including humans. They are scavengers by nature and ‘frenzy’ only with dead meat in the water. They are more aggressive when they are more starved but most attacks on humans are bites to the fingers or toes. Incidents in the papers are mainly based upon wading humans disturbing Piranha nests.

Why do People Think They are Dangerous?

Hollywood has given the Piranha a bad reputation. Through a lot of villain movies and sequels, they depict the fish as a bloodthirsty killer that will feed on anything that falls into the river. In addition, this toothed fish looks scary with its many razor sharp teeth that are arranged in an interlocking manner to pierce into the flesh of its prey.

The media has not helped with justice to the fish as the attacks on unsuspecting water goers always get overblown creating fear among people.

In the James Bond movie, You Only Live Twice, the Piranha is depicted killing Blofeld’s henchman with such ferocity as to kill a whole person in 30 secs. In the movie, No.11 is thrown into the Piranha pool and within a few seconds, she is stripped to the bone.

The whole preconception might have begun with President Teddy Roosevelt though. In his visit to the jungle of South America, he reported a rare sighting of a school of Piranha fish that could strip a whole cow to the bone within minutes.

What Roosevelt witnessed, however, was a large shoal of piranha which had been starved as it would normally take more time to strip a whole animal. Experts cast doubts on the veracity of the claim but not that the incident occured.

Piranha do not attack large animals, as they are opportunistic feeders that go for weak or dead animals. Most of them, however, live on fruits nuts and seeds that fall into the water.

Most Piranha will be witnessed sitting under the trees where birds have hatched as they hope that the baby chicks fall into the water.

Piranhas are Omnivores and Herbivores

The Piranha has a bad reputation for being ferocious and loving a little meat, but the fish are either omnivores or herbivores. They will feast on plant parts such as the seeds and fruits. They also forage on the nuts that fall into the water and other seaweeds. Additionally insects, crustaceans, worms and other fish.

Red-Bellied Piranha will however not hesitate to attack animals, or humans that fall into the water and appear to be dead. They are attracted to noise that is associated with fruits falling into the water and splashing made by struggling animals.

Several humans who have drowned have washed up ashore with Piranha bites.

Thus when crossing Piranha-infested water fish experts advice people to do so calmly. Piranha can smell drops of blood miles away, and they will swim swiftly to observe the bleeding animal. If you have a wound, it would be a bad idea to swim in Piranha-infested water as they might bite you and inflict further injuries.

Moreover, the Piranha is likely to bite swimmers and other large animals during the dry season when food is scarce; during this season they show signs of cannibalism.

The Reality of Piranha Fear

People fear Piranha after many Hollywood films have tarnished its name, making it a man-eating monster. Moreover, the toothed fish has one of the strongest bites with its sharp teeth that could instill fear in anyone.

The reality is that Piranha is a shy fish that is afraid of approaching larger animals. They will instead swim away from animals larger than themselves. They are only likely to bite people if they appear to have died already, or they are threatened.. Humans are predators and will eat grilled / smoked Piranha fish and eat their soup. Humans kill much more Piranha fish than the other way around. By far..

Most Piranha attacks had occurred during the breeding season when they were protecting their nests. The fish is known to mark their territory and hates competition and could bite anyone that threatens them in their territory.

Swimmers have been susceptible to attack by these little fish during the dry season when food is scarce. However, most of the attacks are not fatal, and there has never been a confirmed case where the Piranha fish killed a swimmer.

The was a famous case of a Piranha attack during the dry summer season in Suriname, which left more than 70 people with bites on their toes. Some with chunks of flesh bitten off from a single bite but no one was killed during this attack.

There have never been confirmed cases of Piranha attacking and killing people. The case of the Brazilian girl whose body was found with severe Piranha bites most likely would have drowned first and as a result the opportunistic Piranha then scavenged her body. 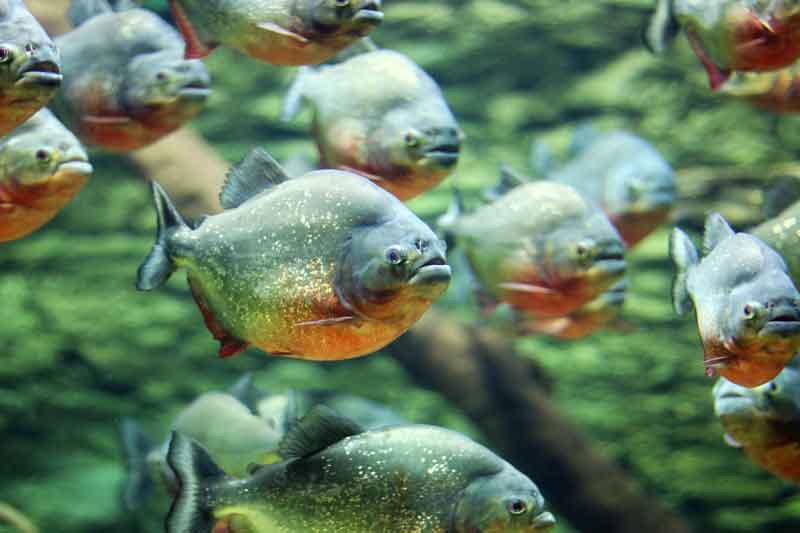 To prove this point, Jeremy Wade from the River Monsters TV show did a fascinating experiment.

Ichthyologists have been fascinated by the feeding of Piranha for a long time and there have been experiments on their behaviors. One of the experiments conducted by Jeremy Wade on his channel, River Monsters, was where he filled a small hotel swimming pool with a school of a hundred Piranha which had not been feed for days.

At first, Wade poured blood into the water; the Piranha quickly rushed to towards the blood as they are very sensitive to drops of blood even from miles away.

When a piece of steak meat was introduced to the pool, a feeding frenzy was witnessed. Once the first Piranha took a bite the rest followed suit as they were attracted to the flesh due to the movement of the fish in the water. The Piranha shows signs of acoustic communication as they take a bite and leave so others can also eat. This is the death from a thousand cuts as they can, therefore, strip an animal to the bone by just taking many small bites.

Unbelievably, Wade himself then gets into the pool and the Piranha appear shy to bite him, and they move away from him, probably because they thought he was a predator. The fish move to the furthest end of the pool and avoid him completely. Even hungry Piranha are a shy fish.

Piranha Attacks on Humans are Rare

Piranhas rarely attack large animals which include humans. Tthey feed on small animals and other fish that are a similar or smaller size. During the dry season, the Piranha can bite unsuspecting swimmers who move deep into their territory, but the bites are not fatal.

In the case of Piranha attack during the summer holidays in Suriname in 2017, more than 70 people obtained bites on their toes and other parts of the body. However nobody was killed, and everybody walked out of the water alive. The doctors dressed the wounds, and almost everybody was back on their feet within weeks.

A few cases where human bodies have been washed offshore with Piranha bites have found that the Piranha most likely attacked the people long after they died.

The case of the Brazilian girl in 2012 who had gone boating with her family when the boat capsized was found dead later with Piranha bites. Again, the Piranha would most likely have attacked her after she died.

Another case of a boy who had fallen into the Amazon waters was found to have been bitten by the Piranha fish, but the post-mortem indicated that the boy had probably died before the fish bit him.

So They Are Harmless Then?

It is true that Piranha rarely attacks humans, as they are afraid of large animals, thinking that large animals are predators. But they are not harmless. Unsuspecting swimmers during the summer have lost toes to Piranha and fingers, but there have been confirmed cases of death caused by Piranha attack.

People have lived in the Amazon for thousands of years, but an attack on humans is rare. In fact, the fish falls prey to the fisherman more than an attacks on humans. The fish, however, is not harmless as they are aggressive during dry seasons when there is food scarcity. This is when most attacks are said to occur.

Moreover, it is not a good idea to swim in Piranha-infested water with open wounds as the fish can smell a drop of blood miles away. When keeping Piranha in an aquarium, dipping your hand in the water with hungry Piranha can lead to biting and aggression. 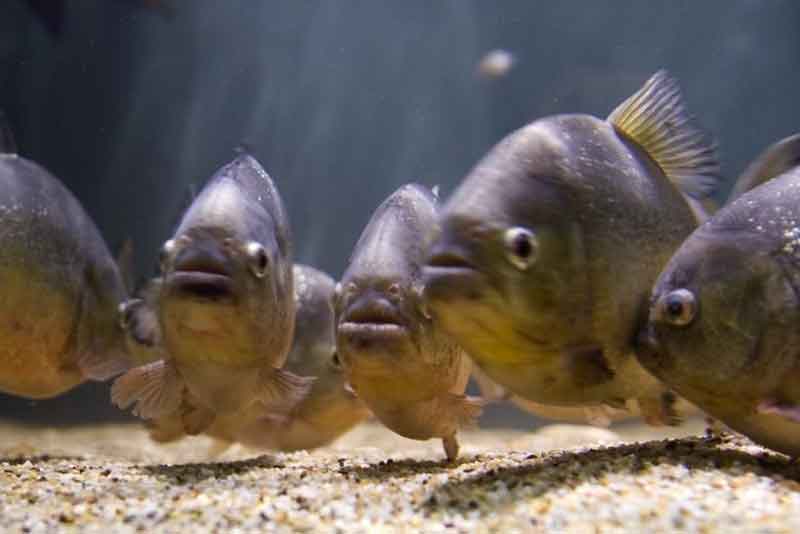 So the Piranha has a reputation of a ferocious toothed fish that can attack any animal that might fall into the water. This is not quite true as they are opportunistic carnivores that eat dead meat or weak animals. Most piranha fish are omnivores who eat seeds, nuts fruits, and other seaweeds.

Piranha rarely attack large animals and humans as they think that they are predators, but will feed on small animals, insects and small fish. They are however likely to be attracted to noise, movement and drops of blood in the water which could prompt Piranha feeding. Piranha are likely to attack people during the dry season when the water level is low, and food is scarce.

There have never been recorded cases of death from Piranha attacks, but they are not harmless. One should move quietly in water infested by the fish to avoid the likelihood of attack by the fish.

So how dangerous are they? Well, it depends. Whilst not harmless, they are not indiscriminate and reactive. You can swim in Piranha water, as they will avoid you but if they are threatened, or food is very scarce, you do risk a bite by being in the water, A bite, and you should still be able to walk out of the water.