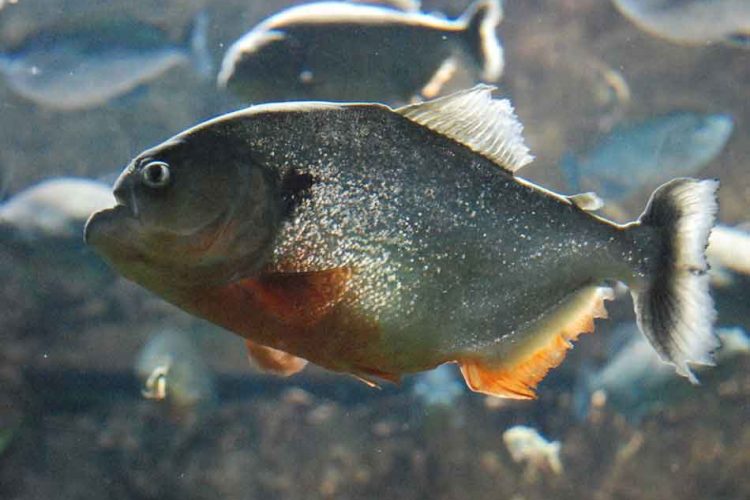 Although there is little chance to observe Piranha in the wild, in an aquarium Piranha can sometimes seem immobile, as if they are resting or asleep.

So, do Piranha sleep? Piranha will enter a ‘resting state’ or a ‘trance’ rather than technically be asleep. Red-Bellied Piranha, will locate cover and hover in the current, the fins barely moving to maintain position. They have no eyelids, so their eyes are inert. They may become slightly less alert and tilt down slightly, usually in the corner of the tank. It’s been noted their red bellies may become more dulled. This is an energy saving state, resting if you will, and depending upon how you define it, could be called sleep.

Your Piranha will not always be active. Sometimes, the group will move towards cover, usually at a quiet corner of the tank out of the way of the current and remain almost motionless.

They may even slightly tilt downwards.

If one is startled, they all move, as if in unison, but if they aren’t they can remain motionless for quite some hours.

If this happens, your Piranha are resting. It could be called sleep, but fish don’t technically sleep like we do and enter a REM state. 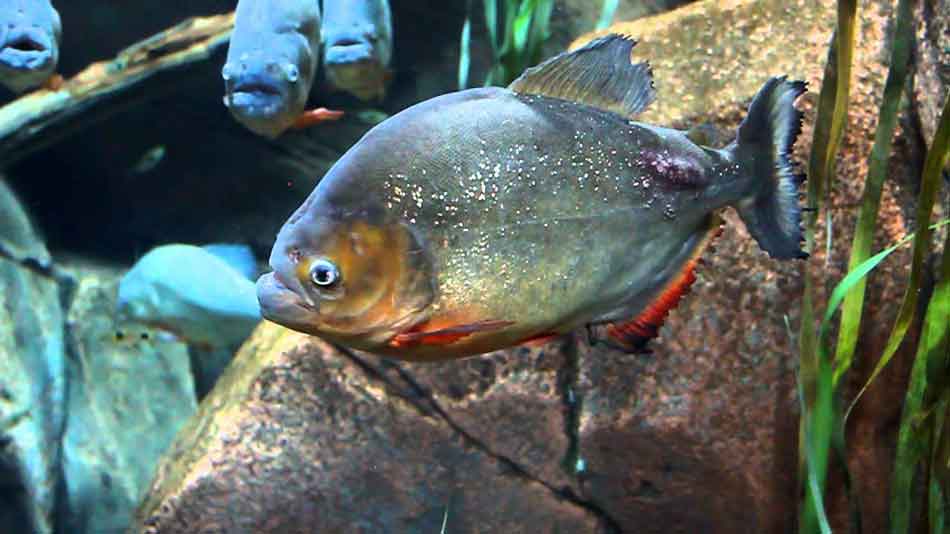 Are Your Piranha Sleeping?

To start with, let’s look at the definition of sleeping.

“….a condition of body and mind such as that which typically recurs for several hours every night, in which the nervous system is relatively inactive, the eyes closed, the postural muscles relaxed, and consciousness practically suspended.”

There are some words in there that describe the Piranha to be asleep, but some not, like “eyes closed”.

Also, fish in general, and Piranha specifically do not have eyelids. They have no mechanism for blocking out the sunlight, other than to move to a darkened or covered area.

Fish, have periods, which can coincide with darkness, when visually they seem to become less aware of their surroundings. Their eyes will be open, and the fins will move against the current, but they don’t appear to be fully alert or attentive to what is going on around them.

Touch the water however, or cause a ripple and the Piranha become fully alert. It’s more of a trance like state than sleep, from which they can come out of at the presence of danger.

Keeping Piranha for any length of time and you will notice that they do this. They seem to ‘hover’ effortlessly, close together as a group if you have Red-Bellied Piranha. They may not be as alert to your presence as they normally are, not anticipating being fed.

If this happens, especially if it’s dark, your Piranha are almost certainly ‘asleep’, depending on how much you are a stickler for dictionary definitions.

In the wild, Piranha are meant to hunt during the day, and sleep during the night, when they are at the least risk of attacks from predators. Their color is meant to dull slightly as they enter this rest behavior.

In an aquarium, they will often group under cover, ever alert to the dangers of predators and remain motionless for long periods of time. They enter a trance from which they can awake if sensing something nearby. Certainly, if something enters the water, when they will act as one.

So no, technically they don’t sleep but it depends on how you define sleep.