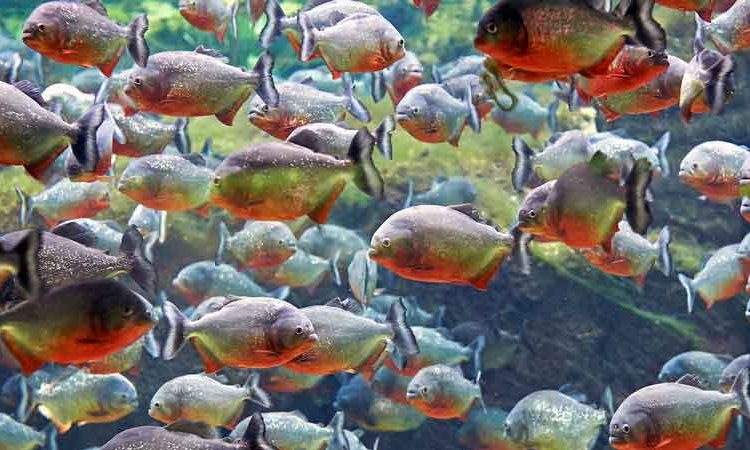 Wild Piranha fish inhabiting inhospitable environments are both prey and predator during their lives. Living in the harsh Amazon basin, their lives are a struggle to stay one step ahead of nature.

Briefly, the Piranha fish goes through the same stages as any fish during its life cycle. The eggs are fertilized by watchful parents, and then spawn into larva, then fry, and then become juvenile Piranha. If they evade the ever present predators they will make it to adulthood and eventually spawn the next generation of Piranha.

What is a Piranha Life Cycle?

The life cycle of any fish describes the changes including reproduction that occur from when the fish is hatched to the time it reaches maturity and participates in the reproductive process itself. Fish have a unique reproduction strategy that is favored by favorable habitats, that are suitable for spawning and juvenile development.

The Piranha fish is found mostly in the shallow waters of the Amazon region. Both the river and and the Amazon basin. Just like many fish species, the Piranha will spawn during the spring or the fall when the temperatures are suitable for reproduction.

Their reproduction patterns are seasonal, and they prefer wetlands with aquatic vegetation as they attach their eggs on the seaweed present. They, however, also lay their eggs on the mud, as they are anchored in one place for security.

Shallow reefs in the rivers provide a rich source of food for the fish, while the rocky structure of the reefs provide security to the young eggs and the fry. The lifecycle in different fish vary, but most fish go through the following stages;

Stage 1 – Eggs: the female Piranha produces eggs in her abdomen which she later lays in the mud or anchored to the seaweed. The male fertilizes the eggs which later develop into fish. In this natural habitat, most eggs will not survive into maturity even under no threat from external factors, such as predators.

Threats to the eggs include changes in water temperatures. Piranha eggs require warm water to hatch. The Oxygen level is an important factor that affects the ability of an egg to mature; eggs require a certain percentage of oxygen to develop into fish.

Flooding might carry away the eggs from their point of anchoring exposing them to predators and diseases, as well as just physical damage to their ability to survive.

Stage 2 – Larva: when the eggs hatch they form larva and will b attached to the egg shells. This young fish will feed on the yolk of the attached egg sacks. Once the yolk sack is absorbed, the fish is fully ready to grow into fry.

Stage 3 – Fry: this is that stage when the hatched fish is ready to feed on their own. They stop depending on the yolk now that it has been depleted and start searching for their own food. They will feed on parts of plants and the algae that are found in their natural habitat. They hide amongst the river plants for security against predators. The location chosen by the parents becomes important here. In most fish species fry still need to undergo a lot of changes which typically takes up to one year.

Stage 4 – Juvenile: in fish, the juvenile is the stage when the fish is developing from the fry to a reproductively mature fish. The time varies from one fish to another, and it is noted that in almost all fish, including the Piranha, it is likely that the fish will not fully develop to become adults.

Threats to survival in the juvenile fish include changes in temperatures such as extremely cold conditions, oxygen levels, food competition in natural habitats and predators.

Stage 5 – Adult: adults are fish which can reproduce, the time it takes for fish to mature varies in Piranha it is almost 5 to 7 years. Female Piranha fish take a long time to reach maturity unlike the male Piranha, most fish species have this particular kind of maturity behavior.

Stage 6 – Spawning: spawning occurs when female fish lays her eggs in the water and is later fertilized by the male fish. The fertilization process takes place either in the water column or in the nest. The male Piranha fish release milt into a nest. For Piranha the rate of fertilization is estimated to about 90 percent. The life cycle of the fish begins again at this stage.

Preconditions of the Piranha Life Cycle

Piranha fish mostly stay in groups of at least 20 fish or more and are distributed along the South American freshwater waterways. This fish matures at about 7 years and will leave for an average of 15 years.

They breed in pairs where the mating Piranha fish prepare a nest that the female lays her eggs and is fertilized by the male Piranha fish.

The Piranha fish prefers staying in shallow waters, especially the rapids. Piranhas will mate during the April and May seasons when the female is most fertile, and the water is warm to sustain the development of the young fish.

The Stages of the Piranha Life Cycle

The females lay her eggs in the mud or a Piranha breeding nest the has been prepared by the male. The eggs will likely hatch after two days especially if the water is warm, as it should be. Most Piranha breeds will lay a minimum of 1000 eggs, which are fertilized by the male fish.

The eggs are well protected from predators, that certainly exist in their natural habitat of the Amazon basin. The eggs are clusters that stick together in the nest; they are very light and will float on the water getting themselves attached to the river fauna.. 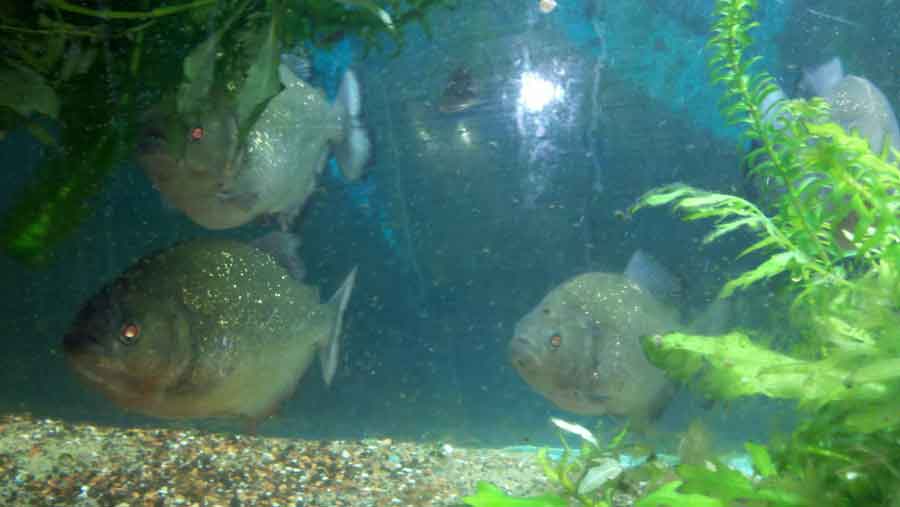 The larval thrive on warm water and feed on the eggs yolk for survival. At this stage they weigh only a few grams. The larva stage in Piranha fish lasts for almost two weeks before the egg yolk is depleted and they start surviving on their own.

The larva in Piranha has all the characteristics that a typical fish would have. Its organs are now considerably developed, although it is weak and survival is still a struggle.

The fry stage begins at almost two weeks when the fish no longer depends on the yolk for nutrition. It will, however, begin to feed on natural plants within the river.

The fish can swim, but will hide behind sea plants as it is prey to most predators in their natural habitats. Also, the current might be too strong and it still needs protection.

The fry is just a few inches, and is much stronger than the larva; This stage will last for about one year in Piranha fish, but it gets bigger, stronger and more able to take care of itself with each passing day.

The juvenile stage in Piranha fish lasts for almost two to five years depending on the species, the fish is now about 6 inches long and weighs more than the fry, and they will swim in schools for protection against predators.

The Juvenile will exercise some sense of independence, and they can feed on other small sea animals. Their jaws are now strong, and they will bite other fish that pass nearby. 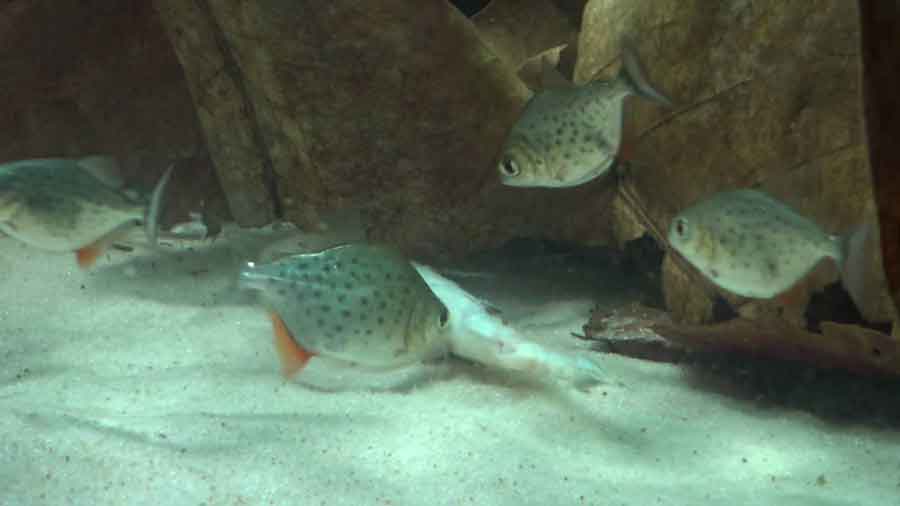 The average Piranha will mature at about five years, but is considered an adult after one year, when they are capable of reproduction. They now weigh almost 5 lbs and are about 6 to 24 inches long, again depending upon the species.

The fish that survive to adulthood rarely die unless they are infected by disease or fall prey to predators that exist in their natural habitat. Adult Piranhas will hunt for food as they are powerful scavengers and are often termed as the vultures of the sea.

They are omnivores that feed on plants, seeds and fallen fruits they will, however, feed on the meat of dead animals that fall into the water. People fear adult Piranhas as they think that they might attack, as they possess razor sharp teeth. However, this is a myth as attacks on humans are not significantly reported.

Bodies that have been washed offshore are believed to have been dead before Piranha attacked them.

This is the stage when the fully developed female Piranha fish lays her eggs in a nest. She will lay around 1000 eggs that are fertilized by a male Piranha.

The rainy season will be around December to March so spawning can start to take place around these times, depending upon precise location around the basin.

They will make nests that are suitable for the protection of the eggs. The fish is more aggressive during this period as they protect their eggs although the fish is known to be aggressive; it has parental skills which most fish lack.

Gestation period for a typical Piranha is around 4 to 6 weeks, and both the male and female Piranha will hang around the eggs until they start to hatch. 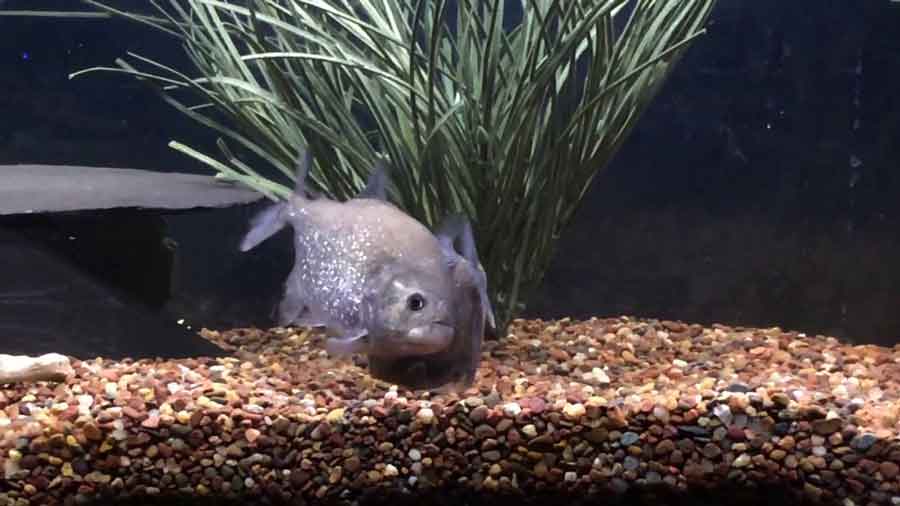 How Often Do Piranha Reproduce?

The adult Piranha will spawn when they are about one year, their mating is seasonal, being around April and May, when the waters in the Amazon are warm to favor development and growth of the young fish.

Fish experts believe that reproduction in Piranha happen mostly during the rainy season when their natural habitat is characterized by adequate food that will work for the young ones. This fish only breeds when the conditions are right and thus Piranha are seasonal breeders

If you are keeping your Piranha in a pond, it will be probably bred when the right conditions are present. It is, however, estimated that the female Piranha fish that inhabit the Amazon region lays eggs almost during every rainy season.

Thus an average female will lay eggs 10 to 15 times throughout her life.

Research on the life cycle of the fish indicates that at various stages the fish will show some kind of growth that promotes development into adulthood.

Piranha fish do not always survive to adulthood. There are predators like the caiman in their natural environment, as well as storks and egrets.. It should also noted that the fish could be carried away by strong currents if they are not properly protected in nests.

As the fish develop to fry, they are predisposed to diseases that will be deadly, limiting the progression of their number. Even after the fish has matured, predators such as the caimans will still threaten it, therefore, they swim in schools.

If you want to breed Piranha, conditions need to be relatively strict and replicate those found in their natural habitats. As you can control the environment, this is easily achievable.