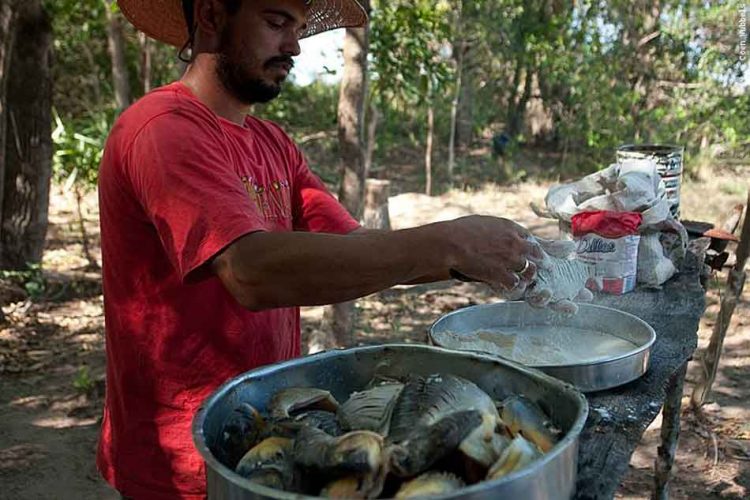 With the reputation of being a dangerous fish, along with their aggression and razor sharp teeth, people often wonder if the Piranha has another deadly trick up its sleeve.

So, are Piranhas Poisonous? No, not at all. They are not poisonous in any sense of the word. They do emit a poison as a natural defense like Cobra snakes, nor are they poisonous to eat. The Piranha is consumed as a food source by millions who rely on the Amazon river for their livelihood.

The Piranha are considered  a dangerous fish. The belief normally stems from movies or media reporting, both of which have exaggerated the danger posed by the fish.

They are actually a rather shy and timid fish in their natural habitat, who hide amongst the plant matter in order to evade their ever present predators, like the caiman, river dolphins and birds.

They danger from Piranha usually stems from extreme hunger during the dry season and the threatening of their breeding nests. Bites are often quick, but not fatal to humans. Humans normally receive ‘nips’ on fingers and toes if a Piranha is threatened. The fabled frenzy on humans doesn’t happen, and bodies found in the Amazon with Piranha bites are suspected to have been bitten post death. They are primarily scavengers.

They are certainly not dangerous as an emitter of poison. Piranha have no ability to chemically attack prey.

Are Piranha Safe To Eat?

Piranha are a family of fish, and the word itself has a subfamily of up to 60 species of fish. The most common, and the most famous is the Red-Bellied Piranha, which swims in all locations throughout the Amazon basin.

Some Piranha are said to be more edible than others, and the Red-Bellied is said to be the most eaten of all the Piranha species.

The Piranha is eaten by locals all over the Amazon basin. There is no reason to suspect that fish is poisonous to eat. It does not require any ‘special treatment’ like Fugu fish, a delicacy in Japan which contains lethal levels of poison. The Piranha does not use poison as a self defense weapon, and the fish is quite safe to eat.

So what does it taste like? Well, they are said to be quite ‘fishy’ in their taste. Because of this it’s recommended that they are smoked or grilled in order to not provide an overpowering meal.

So whether you are in the presence of Piranha and fear they might poison you in an attack, or whether you are about to have Piranha as a meal, rest assured, you are not dealing with a poisonous fish.

The flesh is quite safe to eat, and there are no poison sacs to disable prey, that you might be in danger from.

You are quite safe to eat Piranha, without any special treatment. Chefs can prepare Piranha as they would any fish consumed by people.