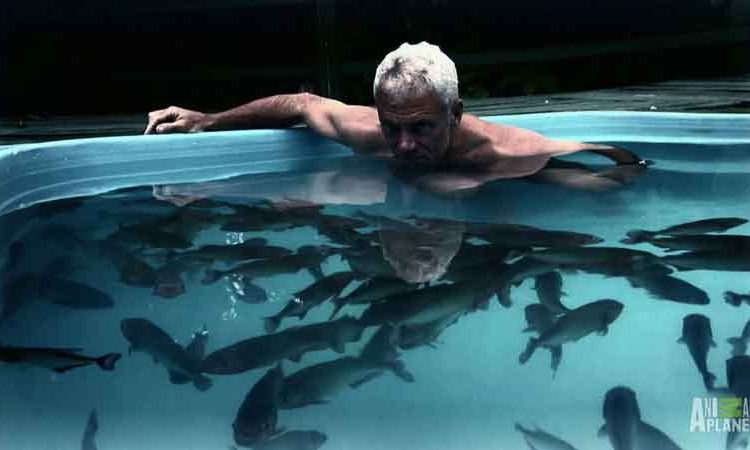 With the reputation  and the appearance of an aggressive fish, many people suppose that Piranha just attack people in a frenzy the moment they are in the water. But is that true?

In short, their reputation largely comes from Hollywood and exaggerated horror stories. Most Piranha fish are not carnivorous in nature, and eat plants and fruit that drop into the water. The more aggressive fish, such as the Red-Bellied Piranha are mostly scavengers that diet on insects, other fish and crustaceans. Humans are not part of their diet. They are far too sparse along the Amazon, but their seems to be little inclination to do so. There are numerous stories about bodies with Piranha bites, but experts have speculated that the attacks came after death, not before or the cause. Piranha are attracted to splashing and noise, as well as blood in the water. There are also situations when Piranha are naturally more aggressive, however, humans have been attacked, but it’s most likely that they were doing something to aggravate the fish. So yes, Piranha do attack and eat humans, but it is exceedingly rare. Native fisherman swim in the Amazon all the time. Most bites are the result of defense and perceived threat and are to the extremities only, like toes and feet. In a 2005 study, they found that 30 people in 10 years who had been bitten by Piranha, all walked out of the river despite bleeding. The most aggressive of the Piranhas do not seem to attack an animal larger than themselves if it is alive. They are scavengers primarily.

The idea that Piranha are an aggressive, ferocious fish to humans is more of a myth than reality. Fish experts say that this fish species is a scavenger that will feed on mostly on seaweeds, fallen fruits and seeds, as well as 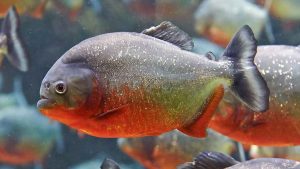 President Roosevelt allegedly witnessed a school of starved Piranha fish eat a cow during a feeding frenzy, which prompted him to write about the fish’s aggressiveness. His narrative was adopted by Hollywood movies such as James Bond, in You Only Live Twice, and other ‘Piranha villain’ movies.

The media narrative on the fish, however, is not true since the Piranha fish will eat the meat of dead animals that fall into the water, and will occasionally attack small fish and crustaceans. They are known as the vultures of the sea, and will rarely attack large animals or humans.

They prefer things their own size.

The Piranha are commonly found in shoals, and it was initially thought that it would attack its prey in shoals, but a recent study indicates that the Piranha only stays in groups so that it avoids prey such as alligators, birds and other big fish.

What Are the Attacking Breeds?

Even though the Piranha is not likely to attack, and would hide away from humans even in a fish pond their structure is suitable for attacking and ripping flesh from the bodies of their prey.

The Red-Bellied Piranha is believed to be the most aggressive species of the Piranha that are likely to attack other animals when threatened, or when food is scarce. The black Piranha is also known to have a very strong bite, stronger than any other vertebrae in the world.

Piranha are typically muscular with very sharp teeth suitable for attacking and tearing the flesh off their prey. Their teeth are likened to sharp knives that would tear off flesh easily. Although these fish breeds are known to attack, they rarely attack animals which are bigger and will only feed on the dead carcass of animals that fall in the water.

They, however, might attack other fish, especially during dry periods when there is less food or when they feel threatened.

Why Are Humans on the Water?

Entire cultures use the Amazon as a way of life. They cultivate the land and feed the populations through farming, hunting and fishing. The Amazon is rife with local fisherman catching their dinner. Their is a lot of interaction between humans and nature along this river, although primarily in the Amazon basin.

The rain-forest provides further nourishment and trees, used for building habitats along the river. 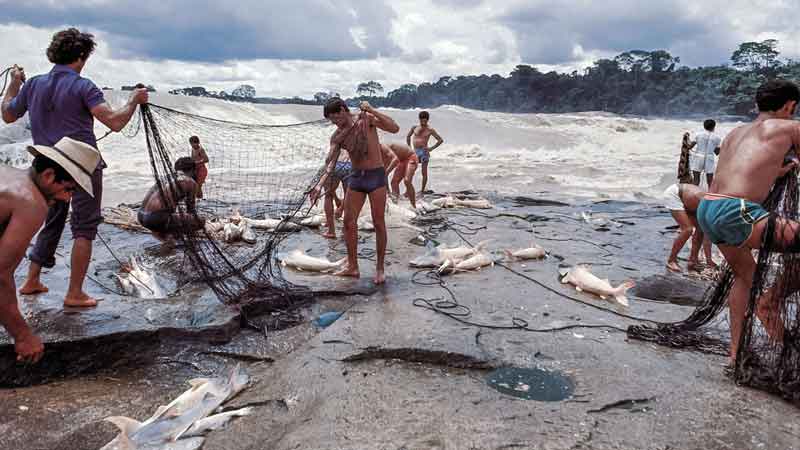 People should be careful when swimming in water infested by Piranha fish though, they do not normally attack humans but they can bite sensitive parts of the body causing immense injuries.

Most fishermen report that the Piranha fish can bite through nets when caught and can even bite hands when handled without protection.

What Prompts an Attack?

Teddy Roosevelt reported that the fish would tear the flesh off any animal that would find itself in a pond infested by the fish.

This, however, is not true since Piranha fish do not normally attack people. They might be triggered splashing as they associate the splashing of water to the falling of fruits which is an indication of their mealtime.

When they feel that their eggs are under threat they attack any animal that comes nearby. Ironically the Piranha possesses a parental instinct, unlike most fish.

A shoal of Piranha that might feel threatened could scare away an animal by attacking them. When you are crossing a river infested by this fish species, fish experts say that you should avoid making a commotion that would attract the Piranha’s attention. They are attracted to unnatural activities, thus it is prudent to minimize your movement when crossing a river.

When swimming in water where Piranha may be resident, do so with smooth fluid motions. By not talking or use of flashlights at night you minimize the risk of attack.

The fish moreover is attracted to blood. It is a sign of an injured animal and triggers attacking behaviour. Its instinct will be if you are injured you are less likely to attack back. The survival mechanism at work. Thus it is not a good idea to swim while injured as they could think you are an injured animal and might bite you.

Humans splashing and messing about in the water also do not possess the symmetry to avoid an attack. It looks like thrashing to predatory fish which is a natural signal for an injured fish, thus it invites attack. 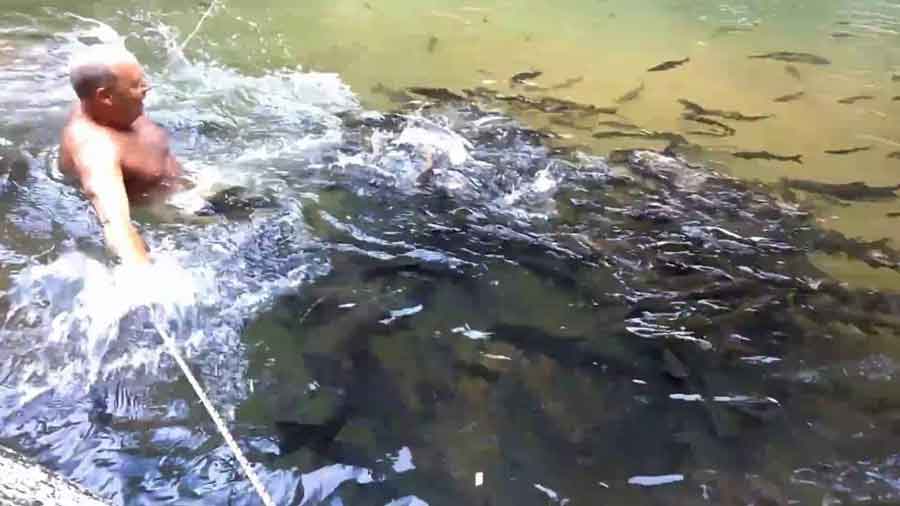 When Are the Most Dangerous Times?

Piranha can attack during the low water seasons when food is scarce. This is true since these are dry periods when there is less food in their habitat. The attack will come purely out of hunger, and any attack will have overridden natural instincts to do so.

Some swimmers in the Amazon region during the summer usually report bites from these fish, when a hungry Piranha fish can bite off the fins of other fish, and would show signs of cannibalism.

During the mating season, the male Piranha fish ensures that the eggs and the fry are safe; they are known to attack any animal that would threaten the young fish. If you appear as a threat to these fish, such as treading near their nest, they will not hesitate to fight back, just like any other animal.

Are All Attacks Deadly?

Piranha attacks are mostly exaggerated to fit the Hollywood narrative of a ferrous fish. In respect to humans, their attacks are not deadly.

Piranha attacks are limited to bites on the victims and the bodies that are washed off-shore indicating that the victim might have died before Piranha fish attacked them. Feeding attacks during the dry season are not very common, most people who are bitten by fish indicate that it was not for feeding but as a warning as the fish would have felt threatened by the presence of humans in their habitat.

The timing of most attacks is specifically during the mating season when the Piranha are most aggressive. Moreover, humans are not part of the Piranha’s diet unless the body of a dead person is washed into a river. 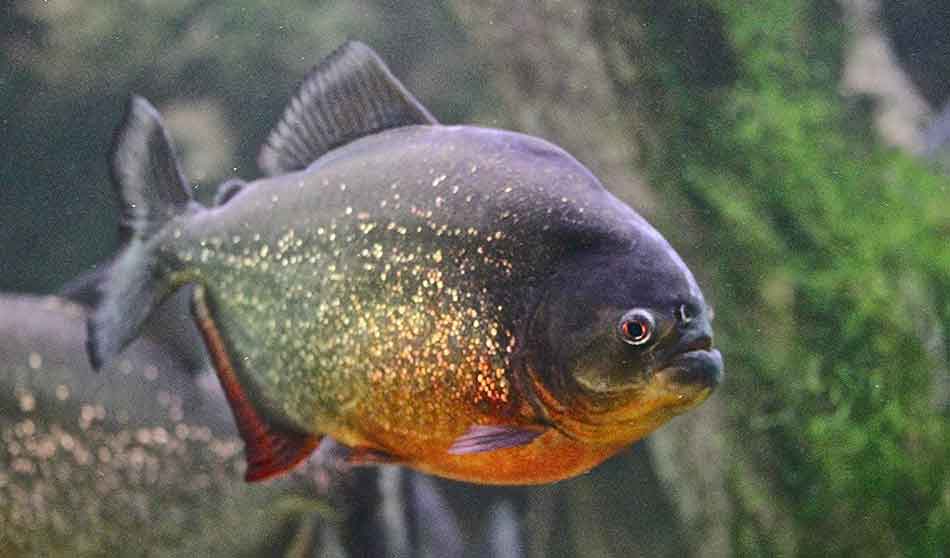 Humans, in general and with a little knowledge, are not in danger from Piranha attacks. Such incidences are very rare and are not accurately reported by the media as they are extremely exaggerated.

In the last ten years, there have been very few attacks. For instance, there was a  case of the Brazilian girl who was reported to have been eaten by the Piranha fish when their boat capsized. Postmortem results indicate that the girl would have been dead before Piranha fish bit her.

Other numerous “deadly attacks” reported by the media is actually about the fish scavenging on human corpses rather than true attacks.

Piranha fish just like any other animal would overcome their nature for opportunity or desperation to bite a human. Most of the attacks are not fatal. The fish can attack when threatened and as a warning for people to keep off their eggs. The Piranha is not likely to attack animals, which are many times bigger than their own bodies.

Despite the thinking, humans should not feel threatened by this fish unless there is provocation, blood and injury, splashing or unsymmetrical behaviour.