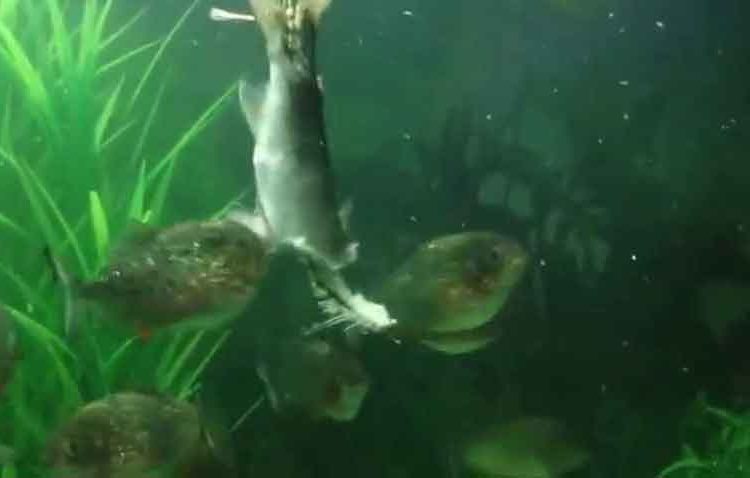 If you are thinking about owning Piranha, then with their very sharp teeth and propensity for aggression, it’s a good question. In a school, whether in the wild or an aquarium, is there a chance that one Piranha will eat another one?

In short, yes, Piranha are a cannibalistic species. Although most Piranha are omnivorous in nature, the Red-Bellied Piranha is carnivorous. Studies have proved that they will nip and the tail and eyes of fellow fish and other Piranha if aggressed against. They also eat fish as part of their natural diet. While not regular, they will eat other Piranha if hungry. In the wild this happens more often in the dry season as food scarcity takes place. In an aquarium it can happen if they are not fed regularly enough or the tank is too small.

To be clear, the dictionary definition of cannibalism is;

“the practice of eating the flesh of one’s own species.”

The Piranha is thought to be carnivorous fish, mainly feasting on live animals. This however, is not quite true, as they are a shy timid fish that feeds mostly on plants. They are omnivorous in nature. Most Piranha are herbivores, but 4 species are omnivorous, such as the famous Red-Bellied Piranha.

The Piranha’s reputation is due to false or exaggerated media reporting and Hollywood movies like the James Bond films, as well as the 1978 movie.

The report by Teddy Roosevelt on this flesh loving fish was exaggerated, and quite possibly staged for the important dignitary.  He depicted the fish as a meat-loving creatures and ‘a crazed fish’. Ichthyologists say that the fish is an omnivore feeding on nuts, fallen fruits, insects, small fish and is an opportunistic feeder on dead or weak animals.

Piranha rarely attacks large animals, unless there are drops of blood in the water or they sense that the animal might be injured weak or dead. They are known to be the vultures of the sea. 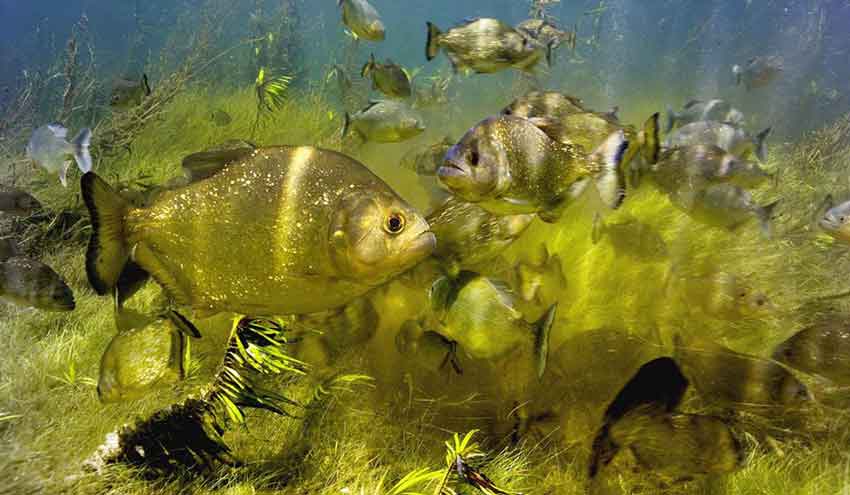 Do Piranha Eat Other Fish?

Piranha feed on other fish, especially smaller fish that cross their territory. The Amazon basin contain many fish that form part of the Piranha diet. Piranha will bite at the fins of other fish and at their eyes as a form of security in an attack.

Piranha will avoid eating fish that are larger than themselves as they see them as predators rather than prey.

During the mating and breeding season Piranha are known to guard their territory by chasing and injuring other fish that come close to their young one. Fish experts advice Piranha fish owners to feed their aquarium Piranha frozen fish, as well as fish offal, as they are a good source of nutrients.

Do Piranha Turn On One Another?

Piranha do not eat each other in preference. They are skittish, timid fish, and they stay in a state of fear from attack from their fellow Piranha fish. They have a series of barking sounds used to warn other Piranha fish.

At all the times they are alert and should know the location of the fellow Piranha fish in their habitat, and with perfect knowledge on their state of mind and when they are likely to attack.

During the dry season when food is scarce in the Amazon basin, Piranha will be more likely to attack each other, mostly taking bites on the fins of their fellow species. The fins, however, grow back within a short time.

There are times when the fish injure each other to the point of causing death. When a Piranha dies the rest become opportunistic feeders on the dead fish.

In an aquarium, where the fish might be close in proximity, they are more likely to attack each other as they protect their territory. Especially if they are not fed often. The smell of drops of blood from injured Piranha fish make the other fish attack the injured fish.

The Piranha is an omnivorous fish that will feed on plant materials and meat as well they are known as the scavengers of the Amazon Rivers. Piranha eat fallen fruits, seeds, nuts, smaller fish, worms and insects, and will rarely attack animals larger than themselves.

During the dry spell in the Amazon Basin when there is food scarcity Piranha will feed on small fish and can turn on themselves when there is extreme food scarcity. In an aquarium, they should be kept in large tanks and be well fed to avoid incidents of cannibalism.

So, while cannibalism with Piranha is not a preference for the fish, there is no denying that it does occur. They will turn on their own species if there are no other food sources, or to defend their territory.