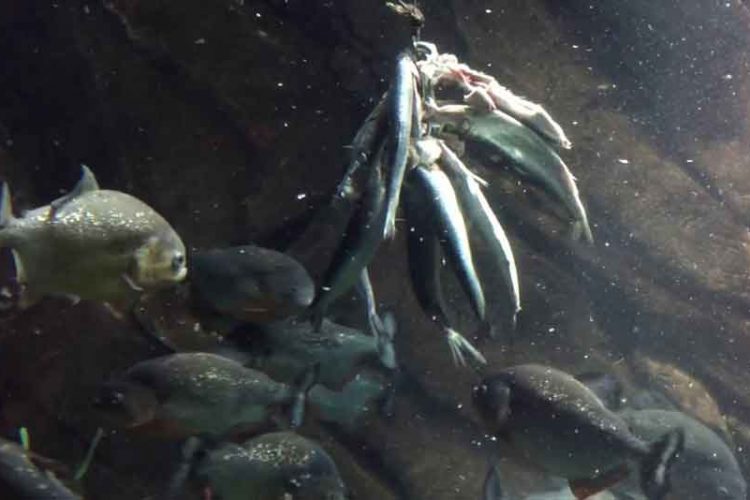 When you see Piranha, their razor sharp teeth and their fearsome reputation for attacking, it’s an important question to be mindful of if you want to feed Piranha.

So, will Piranhas eat bones? In short, no, Piranhas will not eat bones but the question requires some nuances. While possessing a bite that can go through bones, especially of small rodents and reptiles, the Piranha are after the flesh on the bone, not the bone itself. Large carrion will often be stripped ‘to the bone’ because their is a lot of flesh on them. A small rodent will have the bones crushed in a bite because it is smaller and the attacking strike will go through them. It is perfectly possible for a large black Piranha to eat bones as part of a meal, although a Red-Bellied school will strip the meat off carrion because the bone is not a needed part of a nutritional meal.

When discussing Piranha, most people eventually come to the phrase ‘strip them to the bone’ when talking about feeding habits. This implies not eating bones. In much the same way humans eat ribs.

We take the flesh off the bone, but do not consume the bone. Thus there is an inherent belief that Piranhas do not eat bones.

While this true in general as there is no nutritional value in a bone, it is not considered a natural part of their diet. On carrion, Red-Bellied Piranha will strip the meat off a bone, and leave the carcass alone.

They won’t eat a bone for bones sake. That is, there has to be meat on it. A bone carcass will remain untouched. 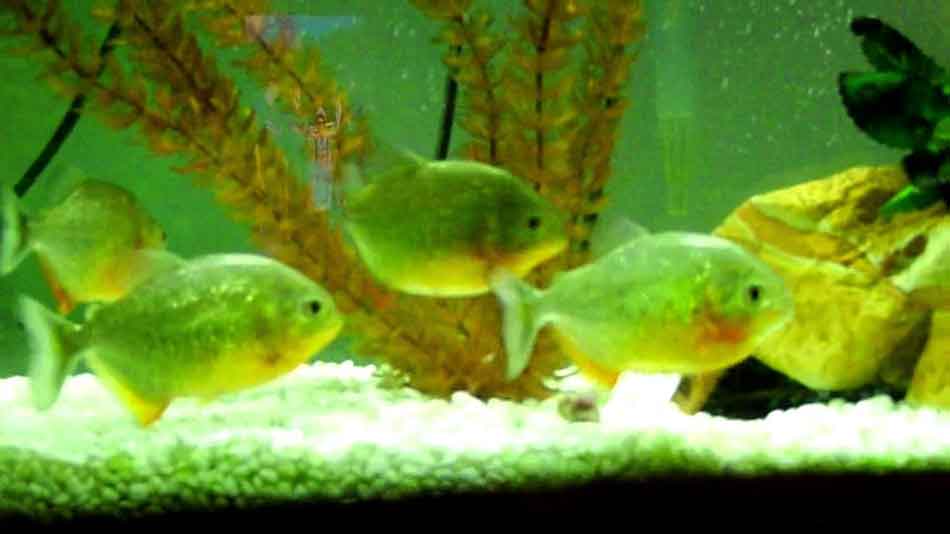 Stripping An Animal To The Bone

Piranhas are generally scavengers, acting a lot like vultures of the Amazon basin. They are primarily after the flesh off the bone.

Remember, sunbathers wading near Piranhas in the dry season have disturbed Piranhas and while most report nips and cuts, a few have reported a missing part of the tow.

When attacking other fish, Piranha have been studied and found to usually go for eyes and fins. In an aquarium, fin nipping is an occurrence usually signifying an overcrowded tank.

Many of the human victims of Piranha, found floating with multiple Piranha bites, are still in a human shape. The skeletal structure is still intact. This is because the Piranha are stripping the flesh off the body, and not wanting to eat the bones.

Can Piranha Bite Through Bones?

What tends to happen though is that the meat that is needing to be consumed is not necessarily taken off the bone before consumption.

The Piranha have razor sharp teeth, and possess one of the strongest bites around. Relative to its size and body mass, the black Piranha has one of the strongest bites in the animal kingdom. Their jaw muscles are close to rows of razor sharp interlocking teeth and as such produces a bite that can easily tear through flesh, and often accompanying bone.

In the wild, if attacking another animal it depends on its size. There is a lot of flesh on a cow before you get to bone. This a carcass can be left. But if taking a bite from a frog, the bite will often go through bone. The same is true of fish,

So, yes Piranha, can and indeed do eat bones, but they are not intending to consume them. They don’t possess the ability to delicately take off the flesh, so often on small animals the bone can get eaten as well.

They Can Bite Through Steel

In case you think they aren’t capable of biting through bones, because they’d be too tough, maybe this might convince you of the strength of a Piranha bite.

So, while Piranha can and indeed do eat bones, they will not in preference. You do not need to feed your Piranha ‘bones’ from any animal in a diet. Fruits, meats and vegetables are fine, bone free.

They tend to eat bones the bigger the Piranha and the smaller the meal. A small school of juvenile Red-Bellied Piranha will only strip the flesh off a large carcass. With a large black Piranha attacking a small rodent, undoubtedly bones will get eaten in the bite.

Be in no doubt though, that if you feed Piranha meals with bone in them, it is perfectly possible, if the Piranha are large enough, that a bite will take some bone and they will swallow it. It might not be the intention of the bite, but it will happen.

The question as to whether it’s a good idea as well needs to be raised. While it happens undoubtedly in the wild, it will carry risks.

In an aquarium a diet without bones is better, as they carry risk but do not provide survival  nutritional value.